The following list represents the 528 heroes Booster Gold has encountered. Notes on methodology for the entries can be found here. 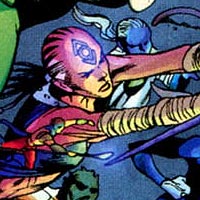 The reclusive and mysterious tribe of creatures who utilize the indigo power of compassion only revealed themselves to the universe-at-large in order to confront the power of the BLACK LANTERN CORPS.

In the week following the conclusion of the Infinite Crisis, the surviving heroes of the crisis assembled in Metropolis to mourn the missing and the dead and dedicate the statue of Superboy in Centennial Park.

Booster Gold attends this meeting largely because he expects the announcement of a new JUSTICE LEAGUE, on which he expects to be a prominent member. When the event doesn't quite come off as planned, he no doubt makes a poor impression on those assembled heroes whom he had not previously met. 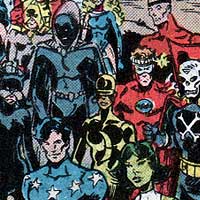 Infinity, Inc. is a group of super heroes composed almost entirely of offspring of the super heroes active during the second World War. Denied membership in the JUSTICE SOCIETY OF AMERICA, they formed their own team.

Skyman and Dr. Midnight met Booster Gold when all three responded to a TEEN TITANS distress call. Booster would meet the rest of Infinity, Inc. alongside the HEROES OF THE MILLENNIUM event. Mr. Bones, never an official "Infinitor," becomes the Director of the Department of Extranormal Operations (see CAMERON CHASE) despite his criminal past.

Heroes of the Invasion 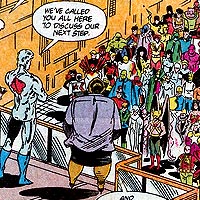 The heroes of Earth banded together to defend the plant from an aggressive ALIEN ALLIANCE from across the galaxy who felt that the super humans of Earth were a threat to galactic stability.

Almost every hero active in America and throughout the world joined together for the earths defense, including Booster Gold and the JUSTICE LEAGUE. This was Booster's first encounter with many of his fellow super heroes.

Many humans had their Metagenes activated by the detonation of the Gene Bomb at the conclusion of the war. One of the first humans to use their powers for good in an encounter the Justice League was Josiah Power, who would later go on to form the Power Company.