The following list represents the 559 heroes Booster Gold has encountered. Notes on methodology for the entries can be found here. 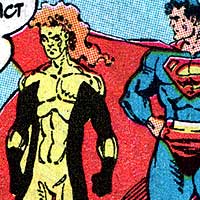 Fleeing the 21st century, Matthew Ryder travels through time as Waverider, seeking to prevent the events that lead to the establishment of the world dictator MONARCH. As a result of his success, he exists in a timeline that is not his own, a time-lost parallel of Matthew Ryder I.

When Booster Gold first meets Waverider, he is disguised as CAPTAIN ATOM. It is not until Monarch attacks the present that the two characters formally meet. Waverider and Booster Gold will cross paths during some of the major threats to the existence of the Earth until Waverider is apparently killed by SKEETS. 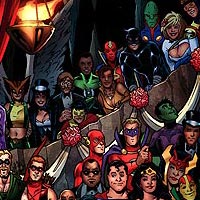 When Green Arrow (see HEROES OF THE MILLENNIUM) and Black Canary II (see JUSTICE LEAGUE) finally formalized their longstanding and tumultuous relationship with a wedding, they invited scores of their friends and fellow costumed crimefighters.

Despite tenuous ties at best to the wedding party (his relationship being limited to little more than shared adventures with both as members of the Justice League, Booster Gold was invited to attend the wedding.

Two members of the RULING COUNCIL OF EXOR, Wonder Twins Zan and Jayna escape to Earth to prevent destructive alien technology from being misused on their home world.

BLUE BEETLE II constructs Booster Gold's Mark X armored power-suit from the very technology that Zan and Jayna are trying to protect. As a result the wonder twins temporarily join the EXTREME JUSTICE team to oversee Booster's use of the power-suit.

Wonder Woman is the representative of the Amazonians to the world of man. With superior strength and weapons bestowed by the gods, Wonder Woman is both ambassador and warrior.

Wonder Woman first met Booster Gold when both were HEROES OF THE MILLENNIUM event. Since then, they have met frequently, often working together during major threats to the existence of the Earth. For a time, Booster served on Wonder Woman's JUSTICE LEAGUE and alongside her appointed champion, Wonder Girl III, when they were both members of Jonathan Kent's (SUPERMAN) League. Booster briefly met Wonder Woman's successor Wonder Woman II when the title had been temporarily passed to the Amazon Artemis. Booster has also crossed paths with Wonder Woman's biggest foe, Giganta, her oldest foe, Ares, and her mother, Hippolyta.