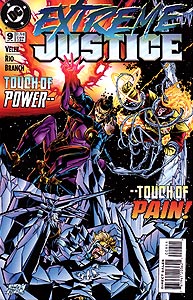 Brief Synopsis: The Justice League reacts to a rampage by two aliens in rural Arizona.

Issue Summary: Captain Atom spends some alone time in space but fails to notice another celestial object crash in the Arizona's Kiscogee Desert. Two figures emerge from the crashed ship and speak in an alien language.

Meanwhile in Mount Thunder, Amazing Man checks in on Maxima, who was having a nightmare. The pair share a romantic moment before Plastique interrupts.

Elsewhere, Booster Gold is struggling to repair his life-suporting power suit. Booster resents that Blue Beetle is out drinking with Firestorm instead of helping him with his armor. What Booster doesn't know is that Beetle is feeling guilty himself. Firestorm doesn't care about Booster's predicament, and uses his powers to start a bar fight with a crowd of hecklers.

The two aliens approach a gas station in search of food. Their odd appearance startles the locals and soon attracts the attention of law enforcement. This causes the situation to come to the attention of Captain Atom, who assembles his team to investigate.

Amazing Man arrives on the scene first and is shot at by local policemen. Once Maxima disarms the police, team goes in search of the fleeing aliens. Firestorm, still drunk, throws up on Maxima. Blue Beetle accidentally removes the belt from the male alien, and the alien instantly disappears. In tears, the female alien removes her belt and is teleported across space to join her brother in an other-worldly prison.

Page 3, panel 5
FIRST APPEARANCE: First post-Crisis on Infinite Earths appearance of Zan and Janya. These characters are based on the Wonder Twins, a pair of super-powered alien teenagers who were members of television's animated "Super-Friends." In this appearance, the Wonder Twins speak Interlac, the language shared by the Federation of Planets in the 30th century.

Jayna: "Are you okay?
Zan: "All that matters is that we escaped -- And that we make that slaver pay!" 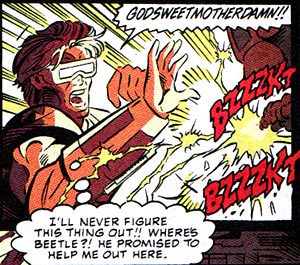 Page 6, panel 4
Booster Gold struggles to work on his armor in Blue Beetle's absence with poor results. Dependent on his armor for life-support, Booster grows frustrated while Blue Beetle and Firestorm grow closer, leaving Booster behind and alone.

Page 12, panel 5
The editor's translation of Zan's comment in this panel is not exactly what the Zan and Jayna have spoken in Interlac on the previous 2 pages. A more accurate translation of the previous panels would be more like:
Zan: "Food!"
Jayna: "We mean no harm--"
Zan: "Urp."

Page 18, panel 5
After being knocked out of the air by Jayna, Amazing Man makes several comments of the sort usually spouted by Marvel comics' green-skinned Incredible Hulk. Booster apparently understands the reference, though he has never met any characters from the Marvel Universe at this point in his career.

Page 24
Editor Ruben Diaz responds to a letter by stating that Booster Gold is approximately 27 years old. This estimation is very close to what one would expect. Skeets indicated in Booster Gold, Vol. 1, #5, that Booster was approximately 20 when he arrived in the twentieth century four years prior to time's reorganization in Zero Hour #0, he should now be somewhere around 25-years old.

Boosterrific Review: A new creative team continues the title's emphasis on intra-team relationships and plots that will appeal to devout DC fans, with an appearance of television's Wonder Twins as misunderstood villains capable of holding their own against the Justice League. Despite a terrible start, this series is gradually becoming quite readable.