The following list represents the 553 heroes Booster Gold has encountered. Notes on methodology for the entries can be found here. 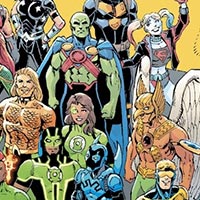 In order for Superman to take the time off to attend the Superman Day celebration, WONDER WOMAN organized some of Superman's most powerful fans to defend the planet from a invasion of interstellar Khund warriors. 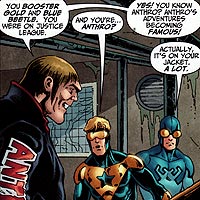 The very first Cro-Magnon man, Anthro is the common ancestor of all humans on Earth in the DC Universe.

Booster Gold met the time-displaced Anthro in an alternate-present while Booster was trying to correct his own mistakes with history. It is unclear what Anthro was doing in the modern world. 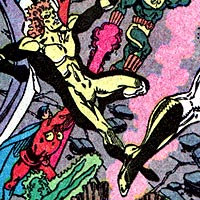 While trying to change his own future, WAVERIDER unwittingly unleashed the villainous dictator MONARCH on the world. At Waverider's warning, the heroes of Earth assembled to prevent Monarch's world domination.

Though the rest of the CONGLOMERATE was nowhere to be seen, Booster Gold responded to Monarch's ultimatum to the heroes of Earth to assemble in Metropolis. 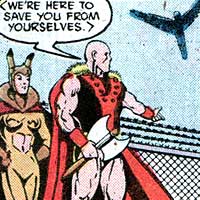 The Assemblers were heroes of the other-dimensional world Angor. Unable to save their own world from a nuclear holocaust, they traveled to Earth to save it from a similar fate.

Booster Gold encountered the Assembler Wandjina only after he had been damaged by a nuclear accident and manipulated into working for Bialya's QUEEN BEE. Later, Booster would work alongside both Bluejay and the Silver Sorceress when they joined the European branch of the JUSTICE LEAGUE. 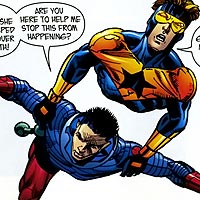 Ivy University Professor Ryan Choi discovered the technology of the second Atom (see JUSTICE LEAGUE) and became an unintentional hero himself as the latest Atom IV.

The Atom was saved from certain death at the hands of LADY CHRONOS by the unexpected and timely intervention of Booster Gold in their very first meeting. Booster would later meet Atom's girlfriend, Amanda Turner, and the couple's child, Ichiro at the Atom's funeral.