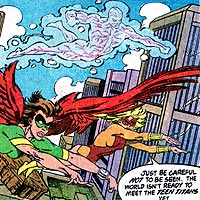 The members of the Team Titans were heroes from the future related to the TEEN TITANS sent back in time to prevent their own history from occurring.

Booster Gold worked alongside the Team Titans and other HEROES OF THE BLOODBATH to defend the Earth from the SPACE PARASITES. 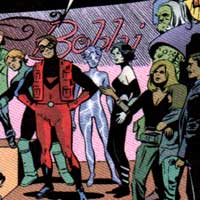 Originally, the Teen Titans was composed of sidekicks of JUSTICE LEAGUE members. Over time, however, the team became a training ground for young heroes of all sorts.

Booster Gold's first interaction with the Teen Titans was also his first ever group team-up (see MAGENTA). Since that time, Booster has crossed paths with different line-ups of the Titans on a number of occasions, usually while in the process of trying to save the Earth from destruction or domination. 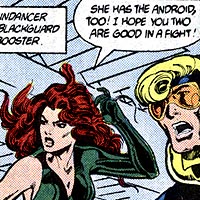 Thorn is the first 20th-century super hero that Booster Gold has the pleasure to fight beside as they struggled to defeat the 1000 criminal organization (see DIRECTOR OF DEATH).

Heroes of the Truth 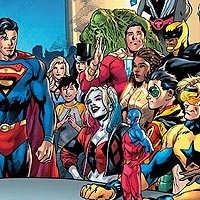 After Superman revealed his secret identity to the world, a motley assortment of heroes helped him keep the peace.

Most of the heroes who met Superman in the Hall of Justice were members of other active groups, including the Justice League, Justice League Dark, Titans, or Terrifics. However, some, like the newcomer Naomi and the possessor of the H Dial, Miguel, were solo adventurers who were working with Booster Gold for the first time.