The following list represents the 554 heroes Booster Gold has encountered. Notes on methodology for the entries can be found here.

The Global Guardians are a team of international heroes assembled by Dr. Mist to police the world. For a time, they were officially sponsored by the UNITED NATIONS. Once the U.N. withdrew support from the team in favor of the JUSTICE LEAGUE, the Guardians found themselves fractured and often manipulated by villainous forces.

Booster Gold usually encountered members of the Global Guardians as foes, working for Bialya's QUEEN BEE or SONAR (though longtime teammates Fire and Ice (see FIRE & ICE) were one-time members of the Guardians before joining the Justice League International). 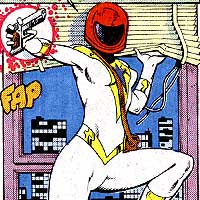 Goldstar was the codename that TRIXIE COLLINS adopted while wearing a power-suit designed by JACK SOO as part of a marketing plan for a female companion for Booster Gold. After Collins refused to don the costume again, the power-suit was worn by MICHELLE CARTER. Once thought destroyed, the Goldstar costume has been restored through the intervention of RIP HUNTER.

Booster Gold was pleased to be rescued from a violent mob by Goldstar. Though he encouraged Trixie to continue in the role of Goldstar, she refused. Booster was unaware that his sister had borrowed the Goldstar power-suit for a joy-ride until she disappeared, abducted by aliens.

The Green Lantern Corps are the policemen of the galaxy. Empowered by the nearly omnipotent GUARDIANS OF THE UNIVERSE, their green energy rings are capable of performing any feat that their possessors can will into being.

Booster Gold's first crossed paths with members of the Green Lantern Corps when he met John Stewart and Katmai Tui after responding to a TEEN TITANS emergency call. He would meet more members as a member of the JUSTICE LEAGUE, where he served alongside Green Lantern Guy Gardner and joined forces with representatives of the Corps on many occasions to fight many a criminal, including long-time Lantern foe Hector Hammond. 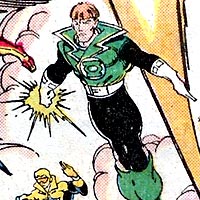 Belligerent to a fault, Guy Gardner has been a school teacher, lawyer, restaurateur, Green Lantern (as Green Lantern IV), Vuldarian Warrior, and all around jerk.

Booster Gold first met Guy Gardner when both were simultaneous members the UNITED NATIONS sponsored JUSTICE LEAGUE. The two have had a long and tempestuous relationship, mainly because Gardner is extremely reluctant to participate as an equal member of a team. In fact, Gardner has been as much opponent to the Justice League as he has helped them, a situation only worsened by the infiltration of the League by Guy's evil clone, Enforcer. Gardner unintentionally brought Kraggz Tormock drones to the Justice League Refuge while learning to deal with his Vuldarian powers.

Despite his surly nature, Guy Gardner has developed several close and loyal friends over the years, including Buck Wargo, Rita Muldoon, and Tiger-Man II.