The following list represents the 542 heroes Booster Gold has encountered. Notes on methodology for the entries can be found here. 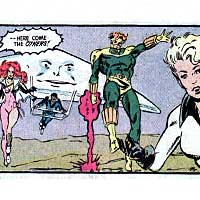 Several teams have adopted the name of the Outsiders. Originally organized by BATMAN after working together in the European nation of Markovia, the Outsiders are a team of heroes willing to work outside of the defend-the-status-quo missions of more traditional teams such as the JUSTICE LEAGUE.

Booster Gold worked alongside the original Outsiders as HEROES OF THE MILLENNIUM shortly before they disbanded. Since that time, he has crossed paths with various Outsider groups during some of the major threats to the Earth and the universe.