The following list represents the 554 heroes Booster Gold has encountered. Notes on methodology for the entries can be found here.

First Meeting with Booster Gold: The Adventures of Superman Annual #4, 1992

Booster Gold worked alongside L.E.G.I.O.N. operatives to combat ECLIPSO while he possessed the power of SUPERMAN . 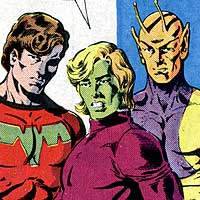 The Legion of Super-Heroes is the premier super team of the 30th century with a constantly evolving line-up of the most powerful members from scores of planets.

Discovering a damaged time machine, members of the Legion of Super-Heroes travel back in time to the 20th century to investigate Booster Gold. Deciding that Booster Gold is not a threat to the space/time continuum, they part as allies, meeting again infrequently during major threats to universal existence. Multiple components of Booster Gold's original costume are derived from the technology of Legionnaire Brainiac 5.

Much later in his career, Booster Gold would later encounter the Legion of Super-Heroes in action against Validus in their native time. Booster would also have the opportunity to visit Doctor Tsuris at the Metropolis University Time Institute. 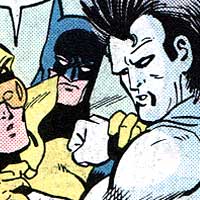 After murdering ever other member of his race, the extremely ill-tempered Lobo roamed the galaxy as a bounty hunter of the highest caliber.

Lobo and Booster Gold first crossed paths while Lobo was hunting Martian Manhunter and other members of the JUSTICE LEAGUE for the Cluster (see MANGA KHAN). Desperate for powerful new members, MAXWELL LORD inducted Lobo into the Justice League, an arrangement that did not last very long. Since that time, Booster and Lobo have met again while battling DESPERO and the ECLIPSO-controlled SUPERMAN.