The following list represents the 329 villains Booster Gold has encountered. Notes on methodology for the entries can be found here.

Once in a relationship with a young Ryan Choi (later the ATOM IV), the woman formerly known as Jia would eventually become Lady Chronos with the goal of total history domination.

Booster Gold interceded when Lady Chronos used the time-traveling powers of the first Chronos (see STARRO THE CONQUEROR) to torture the fourth Atom. 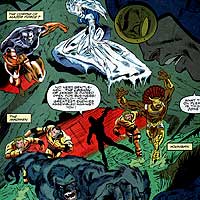 Driven mad by the memories of his criminal father, Brainwave II (see INFINITY INC.) formed a team of criminals (mostly older foes of members of individual EXTREME JUSTICE and JUSTICE LEAGUE members) with plans to dominate the world.
The League would later reform under Lex Luthor with similar goals.

Booster Gold and Extreme Justice fought the Legion of Doom in a swamp in Florida. Booster would confront Luthor's reformed Legion during the "Year of the Villain."

First Meeting with Booster Gold: The Adventures of Superman #476, 1991

The Linear Man is the code name of Travis O'Connell, one of several operatives, including Liri Lee, WAVERIDER, and RIP HUNTER, collectively known as the Linear Men who patrol time and ensure that the events that caused their creation are allowed to happen. The base of the Linear Men is at the end of time, a location known as Vanishing Point.

The Linear Man damaged SKEETS in order to lure Booster Gold into a trap, planning to take him to justice for crimes against time. Booster was saved from capture by the intervention of SUPERMAN, who was accidentally trapped in Booster's place.

MAXWELL LORD was saved from a life-threatening disease when KILG%RE placed his consciousness into the mechanical body of the second Lord Havok (see EXTREMISTS).

For reasons which remain unrevealed, while posing as Lord Havok III, Maxwell Lord launched an attack against the JUSTICE LEAGUE, including Booster Gold.

Maxwell Lord is a businessman with a knack for manipulation. Driven by a need to control the Earth's mightiest defenders and aided by a sentient computer, Lord re-organized the JUSTICE LEAGUE and manipulated it into alliance with the UNITED NATIONS. Lord has a limited ability to influence the minds of others (a power gained courtesy of the ALIEN ALLIANCE), and has managed to cheat death on several occasions. Shortly after John Charles Collins (as Judgment) broke up his first funeral, Lord reappeared as LORD HAVOK III. Years later, Lord became the Black King of CHECKMATE and took the opportunity to wage war on the super-powered community. Despite yet another death at the hands of WONDER WOMAN, Lord was restored to life as a member of the BLACK LANTERN CORPS and continues to threaten those superhumans with powers far beyond those of mortal men.

Maxwell Lord broke into Booster Gold's Metropolis BOOSTER GOLD INTERNATIONAL in order to offer Booster membership in the Justice League. For years, the two would be cronies, working together in the Justice League and SUPER BUDDIES for the good of society while profiting on their adventures. Booster briefly met Maxwell Lord's secretary, Ms. Wootenhoffer, who was later revealed as an agent of the MANHUNTERS. Following the death of the BLUE BEETLE II, Booster and Lord became fierce enemies.

In one of his adventures through time, Booster saves the life of Lord's ancestor, Cyril Lord, from ENEMY ACE in World War I. Booster would also save Lord's mother Naomi Lord in World War II. 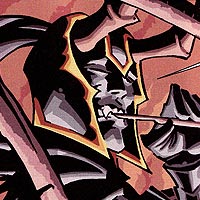 Lord Satanus, and his sister, Blaze, are the children of the wizard Shazam who have spent most of their immortal lives battling for power in the underworld and beyond.

Booster Gold unwittingly became a pawn of Lord Satanus in his battle against his sister when he was forced to fight Cerberus in the third circle of Hell. 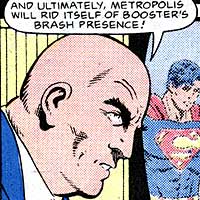 Criminal mastermind Lex Luthor presents to the public the image of an upstanding businessman, owner and president of the conglomerate LexCorp. He is often protected by his personal bodyguard, Mercy.

Lex Luthor hates all competition, and while Booster Gold was the owner of the thriving BOOSTER GOLD INTERNATIONAL business, LexCorp was amongst its chief rivals. Luthor eventually hired an employee of BGI to attack Booster Gold as the villain Attack Dog One in order to damage both BGI's and Booster's public image, a plan foiled by Booster Gold with the aid of SUPERMAN. No doubt enjoying having a former rival on his leash, Luthor would later sponsor Booster Gold's CONGLOMERATE.