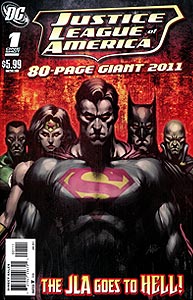 Brief Synopsis: Members of the Justice League find themselves dispersed among the nine-levels of Hell.

Issue Notes: This issue comprises nine brief chapters featuring pairs of Justice Leaguers followed by one chapter of the League assembled, an homage to the style of Justice League creator Gardner Fox. The story of this issue borrows strongly from Dante Alighieri's Inferno (the first book in his Divine Comedy), and in many ways is a continuation of the story from the 2008 Reign in Hell mini-series. Despite appearing on the cover, Martian Manhunter does not appear in any story within this issue.

Story Notes: Each chapter is written and illustrated by a slightly different creative team. Though Boosterrific.com typically credits all artists working on an issue including Booster Gold, since in this case the artists are given clear credit for their individual story contributions, only artists working on chapters including Booster Gold are credited in the Boosterrific database.

Page 43, panel 1
At the beginning of the chapter "Gluttony," Booster Gold, Skeets, and Oracle find themselves in a strange environment. Booster is quick to make a reference to L. Frank Baum's Wizard of Oz, the story of a Kansas farm girl transported to a magical land.

Page 44, panel 5
Despite all the years, Booster may still have something of a gambling problem. Is this supposed to represent Booster's self-indulgent gluttony: a glutton for self-punishment?

Page 45, panel 3
According to Dante Alighieri's Inferno (published in the 14th century), the third circle of Hell is the level of Gluttony, where the gluttons are eternally punished for their sin by lying helpless in mute, self-indulgence. Gustave Dore was a prolific French engraver of the 19th century who achieved great fame for his illustrations of Dante's much earlier literary works. Given the nature of Hell in the DC Universe, it is unclear whether Dore somehow was able to depict the third level of Hell as it truly appeared, or if the third level of Hell looks the way it does to Oracle because she was influenced by her earlier visit to the Musee D'Orsay museum in Paris, France.

Page 45, panel 4
Booster Gold very casually shrugs off the suggestion that he is in Hell. After all, he's been here before, and last time it was his fault. See JLA: Classified issues #5 through #7 for the gory details.

Page 47, panel 2
These days, a comparison between Booster Gold and the Phantom Stranger is probably apt. Like the Stranger, Booster's current mission is to move through time and space to ensure that events unfold according to some cosmic master plan. Booster just takes a more active role in events than the Stranger ever did.

Page 47, panel 3
HIS STORY: People tend to assume that Booster Gold wants Superman's glory because in his early days, Booster Gold did want Superman's glory. He openly said so. Booster Gold has matured greatly in recent years, however, and what he discloses here about his need to be needed instead of simply popular may be true to his character.

Page 47, panel 5
In Dante's Inferno, the guardian of the third circle of Hell is Cerberus, the three-headed hellhound. In classical Greek and Roman mythology, Cerberus was the guardian of all Hades, underworld land of the dead.

Page 49, panel 4
It is unclear if the head of Cerberus depicted in this panel is the same one that Booster has entered or one of the other two heads. This is but one of many confusing or poorly constructed panels in this issue.

Page 64, panel 2
Booster Gold joins the other members of the Justice League seen in stories throughout this issue in Purgatory. Unlike the earlier concentric circles of Hell earlier in this issue, this Purgatory is unrelated to the works of Dante's Divine Comedy (notably Mount Purgatory from the Purgatorio) and appears to be more akin to the neutral state where sin is expunged from dead souls before they can enter Heaven of Roman Catholic Church doctrine. The Justice Leaguers who now join Booster Gold and Oracle are Batman, Bulletteer, Demon Etrigan, Donna Troy, Fire, Green Arrow, Hawkman, John Stewart, Lobo, Plastic Man (off panel), Power Girl, Ragman, Red Tornado, Supergirl, Superman, Wonder Woman, Zatanna. This is the first appearance of Power Girl in this issue; she was not seen teamed with any heroes earlier on any of the eight other rings of Hell. She has no lines in this issue, and her presence is unexplained. Notably absent is Skeets, who will not be seen again throughout the remainder of this issue.

Page 64, panel 4
SPOILER WARNING!: The events of this issue were engineered by Lord Satanus in order to free himself from a trap set by his sister, Blaze. The pair assumed control of this realm in the pages of the 2008 mini-series Reign of Hell. They remain opposed by angel and former Justice Leaguer Zauriel. Reveal

Boosterrific Review: Unfortunately for this one-shot issue, the art is wildly uneven even within individual chapters, largely due to negligent editorial oversight. This disjunction only harms a story that is by its very nature disjointed and frustrating. (There are three editors credited for this issue. The Justice League Antarctica displayed better teamwork! And while I'm complaining, I should make an extra complaint against Hi-Fi Designs Studios: this is the worst I've ever seen their work. And all this aggravation for only $6!) The irritating deus ex machina story resolution, while involving several great characters, leaves a reader feeling as though he, too, has been dragged unwillingly on a trip though Hell.