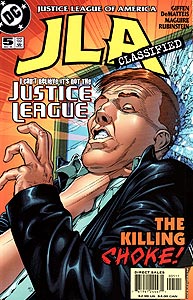 Cover Description: Guy Gardner is slammed into a pane of glass by an off-panel figure who is grasping his throat. (No Booster Gold.)

Brief Synopsis: A meeting between Guy Gardner and Mary Marvel leads to much trouble.

Issue Notes: Originally written and promoted in 2004 as the mini-series I Can't Believe It's Not the Justice League, this story was published in 2005 due to conflicting events occurring in the Identity Crisis mini-series. Events in this story must take place prior to Identity Crisis #1 for obvious reasons. Also, events of the Infinite Crisis mini-series have possibly erased some or all of the events in this issue from history.

This story has been reprinted in:
I Can't Believe It's Not The Justice League (2005)

Page 1, panel 1
The bar that Guy Gardner and Blackguard are opening will be called the Dark Side. This name was previously used for a super villain bar seen in Justice League America #43. Guy Gardner has experience operating bars, having run his own, Warrior's, for several years.

Page 2, panel 4
Though L-Ron doesn't believe him, Guy Gardner was indeed once a lawyer in the days before he was a Green Lantern.

Page 5, panel 5
In Maxwell Lord's flashback of the events occurring between JLA Classified issues 4 and 5, Booster Gold and Blue Beetle II had held back Fire after Guy Gardner touched Mary Marvel in an "inappropriate manner," to borrow Mary Marvel's description of the situation. While Booster has an impenetrable force field, having the human Beetle restrain a being of living flame is probably not a wise move.

Page 12, panel 6
Blue Beetle and Booster Gold have traveled to the Justice Society of America's headquarters in Gotham City in order to recruit Power Girl for the Super Buddies to replace Captain Atom, who has quit the team following the disastrous events of the Formerly Known as the Justice League mini-series. Maxwell Lord mentions that Captain Atom is suing the team for undisclosed damages.

Page 13, panel 10
Angered by the lack of respect that he is being shown by his teammates, Booster threatens to become a super-villain. It is exactly these feelings of loneliness and rejection that previously drove Booster to temporarily give up super heroics (in Booster Gold, Vol. 1, #25) and quit the Justice League (in Justice League America #37).

Page 20, panel 2
Booster compares himself to the Joey Bishop in the Justice League version of the Rat Pack. The Rat Pack was an informal collection of music and recording stars in the 1960s that often congregated around Dean Martin and Frank Sinatra. Joey Bishop was a comedian and television star of moderate popularity (and talent) that portrayed the role of straight man for many Rat Pack performances. Many felt hung around the Rat Pack for the shared glory from the larger stars. On the up side for Booster, Bishop outlived all the other members of the Rat Pack.

Page 21, panel 1
After breaking into Dr. Fate's room in the JSA headquarters, Booster unintentionally delivers the Super Buddies to Hell by way of a mystical device. The Super Buddies consigned to the underworld are Blue Beetle, Booster Gold, Elongated Man, Fire, and Mary Marvel.

Boosterrific Review: Make no misunderstanding, JLA Classified is not an action-adventure, it is a character-study generated for comedic purposes. Fortunately for us readers, these familiar characters provide plenty of conflict and opportunity for comedy without too much distortion of their well-established personalities. With this much laughter, who cares about the lack of action?