The following list represents the 329 villains Booster Gold has encountered. Notes on methodology for the entries can be found here. 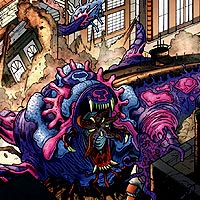 Booster Gold's first encounter with a nuclear submarine-toting Ballostro was disastrous both for the city of Metropolis and for Booster Gold personally. 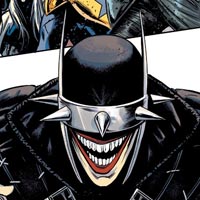 The Batman from Earth-22 was corrupted by the Joker to become a warped version of his arch-enemy.

Among other Justice Leaguers, Booster Gold became an infected pawn of The Batman Who Laughs during the latter's war with LEX LUTHOR. 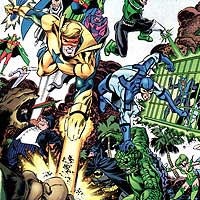 In an attempt to enrich his impoverished country, RUMAAN HARJAVTI invited the world's super criminals to launder their assets through Bialya under the watchful eye of his trusted Security Officer Geoffrey Ffoukes.

After manipulating the villains into rioting against Harjavti (see BLOODSPOT), Booster Gold and the JUSTICE LEAGUE were invited into Bialya to capture the rogue criminals. Booster's first encounter with several criminals is during the League's mop-up procedure.

The goals and powers of the mysterious figure known as Black Beetle remain unknown, though he is in some way connected to the Blue Beetles (see BLUE BEETLE II and BLUE BEETLE III).

Black Beetle first presented himself to Booster Gold as an ally from the future. However, Booster soon learned that Black Beetle was actually working with the TIME STEALERS against RIP HUNTER. 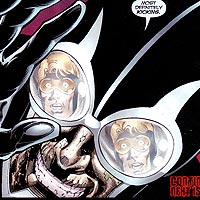 In an attempt to eliminate all life in the Universe, Nekron, the personification of Death, formed the Black Lantern Corps comprised entirely of the physical remains of deceased heroes and villains throughout the Universe. 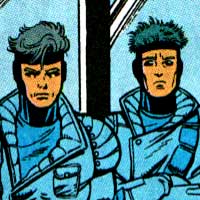 Partners Blake & Corbett were escaped prisoners from an alien planet who sought sanctuary with the JUSTICE LEAGUE to avoid recapture by the Kerrilian alien M'Bal. Despite being hunted by the PEACEKEEPERS, the pair seemed to meet an untimely end at the hands of GUY GARDNER.

Booster Gold met Blake and Corbett during the shakedown run of his first armored costume. His new armor was easily disabled by the duo's alien weapons. 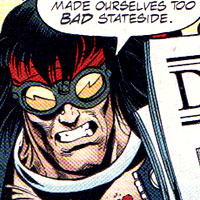 In an attempt to infiltrate the Middle Eastern nation of Bialya to thwart its state-sponsored sanction of super powered villains (see CRIMINAL EXPATRIATES OF BIALYA), Booster Gold adopted the fictitious persona of Bloodspot, a super villain so rich and terrible that he was actively hunted by the United States government.

To disguise himself as Bloodspot, Booster Gold wore a muscle costume designed by Booster Gold's friend, teammate, and frequent business partner, BLUE BEETLE II (who disguised himself as the armored thug Deathmetal). 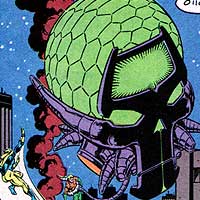 Vril Dox's mind was too powerful to be destroyed when his body died, and he has plagued the cosmos ever since by inhabiting a number of mechanical androids collectively known as the villainous Brainiac.

When Brainiac took over Mongul's Warworld in an attempt to dominate Earth, Booster Gold joined the SUPERMAN led HEROES OF THE PANIC IN THE SKY to take the fight to Brainiac.

Years later, Brainiac would abduct various cities throughout the DC Multiverse and relocate them to a planet under the supervision of his brainwashed minion Telos.

Little is known about the Scottish giant Brigadoom.

Booster Gold battled and defeated Brigadoom, but not before the giant had damaged millions of dollars of property around a Metropolis Sundollars Coffee shop.

Booster would later fight Hit Point outside the same coffee shop, resulting in his banishment from the coffeehouse by the barista Diane. 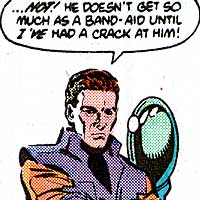 Broderick is an agent of the federal government of the United States in the 25th century.

Taking over the case from Gotham policemen Bill & Ferrell, Broderick was charged with bringing Booster Gold to justice for his crime of unauthorized time travel. Broderick employed a mutant tracker called Animal in pursuit of his prey. When Booster Gold escaped the 25th century (again), Broderick pursued him into the past. 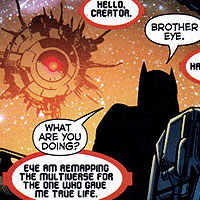 Concerned about the abuse of powers of the Earth's super powered defenders, BATMAN created an autonomous observation dubbed Brother Eye (alternately referred to as Brother One) satellite that was corrupted by CHECKMATE.

Brother Eye launched an attack on the residence of the BLUE BEETLE II that severely injured Booster Gold. In revenge, Booster recruited BLUE BEETLE III to seek out and destroy the hidden satellite. 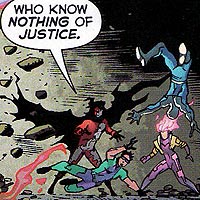 The Burners are a group of super-powered anarchists, determined to change the socioeconomic status quo by any means necessary.

The Burners targeted the JUSTICE LEAGUE INTERNATIONAL as agents of the oppressor state, coming into direct conflict with the group after bombing the Hall of Justice and the UNITED NATIONS. After the group is defeated, Lightweaver's brother, Malik, will continue to seek revenge against the JLI.