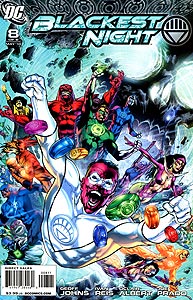 Cover Description: There are multiple covers to this issue: the most common cover depicts Sinestro as the White Lantern chasing colored rings as other heroes disperse behind him. An alternate cover features Green Lantern Hal Jordan. (No cover includes Booster Gold.)

Brief Synopsis: The heroes unite for a last stand against the Black Lantern Corp. 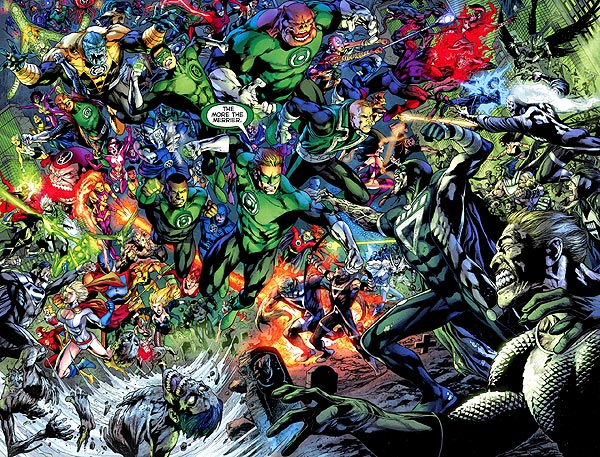 Page 15, panel 3
Booster Gold is seen in the background amidst the chaos beside S.T.R.I.P.E. fighting some indistinct Black Lanterns. Also present during the battle but off panel are the Anti-Monitor, Blue Devil, Captain Marvel, Kid Flash, Metamorpho, Sister Sercy, and Superboy.

Page 33, panel 6
As the dust settles on the battle's aftermath, Booster gold joins the survivors, including Jason Rusch, Steel, and Tri-Eye. Also present but off panel are Deadman, Dr. Mid-Night, Stargirl, and Supergirl.

Page 35, panel 1
Booster is a mute witness to the confrontation between the assembled leaders of the colored lantern corps, including the Guardians of the Universe and their old foe Sinestro, over the fate of Lex Luthor. This is Booster Gold's last appearance in this issue.

Boosterrific Review: What did I say about issue 1? "I suspect that this story will bog down in drawn-out emotional hand-wringing and pointlessly bloody horror, but at least the first issue is a well-crafted story." I'll say it just this once: I was right. I'm hugely disappointed at the unexplained conclusion to this story. (SPOILER WARNING: They brought several sociopathic murderers back to life and they didn't bring back Ted Kord or Tim Drake's father? Seriously?)

Looks great, less filling. And at the end of the blackest night, I still hate zombie stories. (Now I'm looking at both of you, Marvel and DC.)