The following list represents the 534 heroes Booster Gold has encountered. Notes on methodology for the entries can be found here.

Heroes of the Panic in the Sky 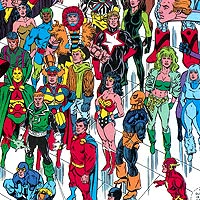 Responding to the threat of BRAINIAC and his Warworld against the Earth, SUPERMAN responded by calling together many of the world's greatest heroes to address the situation.

The timing of Brainiac's attack caught the JUSTICE LEAGUE between rosters, and as a result, many heroes met for the first time as they answered Superman's summons for help. Booster is pleased for the opportunity, as he claims it feels like a reunion of the temporarily defunct League. 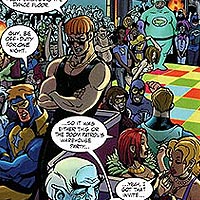 Plastic Man threw a large party at the moon Watchtower of the JUSTICE LEAGUE in order to lure Poison Ivy. The guest list for the party was surprisingly large, and many of the more obscure heroes of the DC Universe were invited to attend.

Booster Gold, at the time semi-retired from superheroics, attended the party alongside several of his old Justice League International era friends. 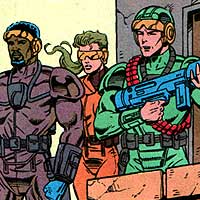 The Peacekeepers are a unit of the United States Air Force designed to be able to confront super powered threats to National Security.

While Booster Gold and the JUSTICE LEAGUE were investigating the crash landing of an alien vessel in Alaska, the Peacekeepers attacked in order to apprehend the aliens BLAKE & CORBETT. At the time, the leader of the Peacekeepers was none other than former Leaguer CAPTAIN ATOM.

The Corporate Crusader of the 1,000th Century, Peter Platinum has modeled his career after Booster Gold's 21st-century exploits.

Finding himself displaced in time following his attempt to rescue BLUE BEETLE II from MAXWELL LORD, Booster Gold meets Peter Platinum and finds the future reflection of his former self difficult to stomach.