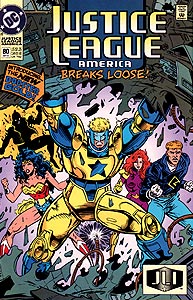 Cover Description: Booster Gold returns to action in a new suit of armor. Behind him, from left to right, are Ray II, Wonder Woman, Maxima, and Guy Gardner.

Issue Notes: This issue features the return to action of Booster Gold following the destruction of Booster's first power-suit in combat with Doomsday.

Page 5, panel 4
Booster calms a young tourist, explaining away Fire's ill-temper with the sexist comment, "you know how women are." Smooth, Booster.

Page 7, panel 2
POWER UP: Blue Beetle II explains to Booster that first version of his new armor is "big and bulky and not as powerful as your old armor." Essentially, Booster's new armor is a redesign of the armor worn by the Rocket Reds. (In Guy Gardner: Warrior #18, Beetle expressly says that the prototype for this suit was based on armor designed by Kilowog. This would imply that he did not use the stronger, Apokolypsian-designed armor Rocket Red #4 acquired in Justice League International #20 but the older, original model as his base for this new power armor.)

Page 8, panel 4
Blue Beetle comforts Fire over the loss of her power as Booster hurriedly dons his new armor for the first time in the background.

Page 12, panel 1
FASHION ALERT: Booster debuts his new armor, the Mark II exoskeleton, to Guy Gardner, Maxima, and Wonder Woman. The armor is similar in design to his original uniform, with gold chest and thighs separated by a blue band. The blue star remains prominent on the chest. The thick metal cowl is open on top, allowing Booster's hair some freedom, just as his original costume did. Wires connect the cowl to the armor's chest plate. Notably missing is the high collar. Overall, the design is extremely ungainly.

Page 12, panel 5
Guy Gardner is ruder than usual in welcoming Booster back onto the active roster. Perhaps something is afoot with Guy?

Page 15, panel 6
POWER DOWN: Guy Gardner saves Booster from missiles launched by the alien craft. It's clear that Booster's armor is slowing him down. 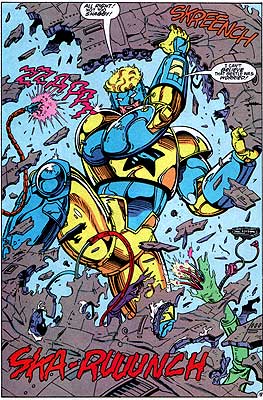 Page 18, panel 1
POWER UP: Booster demonstrated the strength of his new armor as he tears a large hole out of the alien spacecraft. Booster is clearly pleased with the capabilities of the new armor...

Page 19, panel 1
DON'T MAKE 'EM LIKE THEY USED TO: ...armor which proves unable to save him from the alien energy pistols of Blake and Corbett. Booster is down for the count, missing the closing actions in this issue. Mark II Booster Gold 0, Enemies 1.