The following list represents the 330 villains Booster Gold has encountered. Notes on methodology for the entries can be found here. 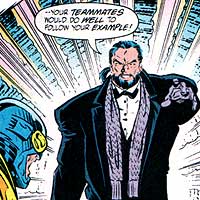 The energy of a meteorite striking the Earth turned caveman Vandar Adg II into the immortal Vandal Savage. Savage has long operated behind the scenes, secretly steering the course of human history.

Booster Gold's interaction with Vandal Savage has been extremely limited, only meeting the man face-to-face twice. Each time Savage delivered a message of impending disaster or significant changes to history.

The mercenary group informally known as the Secret Six was originally formed by LEX LUTHOR during the Infinite Crisis event. The team remains together as a freelance mercenary group renowned for their loose morals.

Booster Gold finally crossed paths with the Secret Six when they kidnapped the Penguin (se CRIMINAL EXPATRIATES OF BIALYA) during their crusade against BATMAN.

Over the years several different creatures have challenged the JUSTICE LEAGUE as the Shaggy Man. Each has been defeated, but their indestructible nature has allowed them to return time and again.

Booster Gold came face-to-face with a heavily tranquilized Shaggy Man III during a holiday party thrown by Vixen (see SUICIDE SQUAD) aboard the Justice League's satellite. They sang songs together. 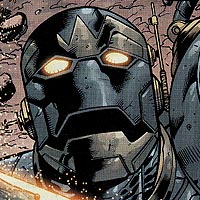 Unwitting agents of the mysterious Peraxxus, the Signal Men are a collection of 50-feet-tall robots buried below the surface of the Earth with their artificial guardian rock men.

On his first mission as leader of the new UNITED NATIONS sponsored branch of the JUSTICE LEAGUE, Booster Gold's mettle was tested when the team encountered the mystery of the Signal Men.

Sinestro was once considered among the best members of the GREEN LANTERN CORPS until it was discovered that he had abused his power to dominate his homeworld of Korugar. Expelled from the Corps, Sinestro has proven to be a powerful foe of the Green Lantern Corps, going so far as founding his own Sinestro Corps to oppose them.

Though a time-traveling Booster Gold met Sinestro before he went rogue, the two still ended up fighting. Booster just has that effect on people.

Skull is a criminal organization utilizing the latest in stolen advanced technology. Founded in Metropolis, the organization and its former leader Atomic Skull have often fun afoul of SUPERMAN.

Booster Gold's first encounter with Skull ended disastrously in the death of Chrissy, an innocent bystander.

Modora native Bito Wladon used his Tuning-Fork Gun to battle many of Earth's heroes in his quest for world domination as the villainous Sonar. Eventually he developed the power to use sound to brainwash his opponents, and his schemes became much grander.

Booster Gold's first adventure after losing his powers to DOOMSDAY was alongside the JUSTICE LEAGUE against Sonar, who had taken over Russia. Sonar used his mind control powers to manipulate Baron Bedlam, Copperhead, Crime Tailor, EUROCRIME, the GLOBAL GUARDIANS, the Rocket Red Brigade (see HEROES OF THE SOVIET UNION), and members of the Justice League Europe and the JUSTICE SOCIETY OF AMERICA into an army powerful enough to dominate the Soviet Union.

The alien parasites that plagued Earth were refugees from an alternate dimension. Their ultimate goal was the awakening of their powerful offspring.

Booster Gold used his positive public image to reassure the citizens of the world that the HEROES OF THE BLOODBATH were doing all that they could to oppose the alien menace. 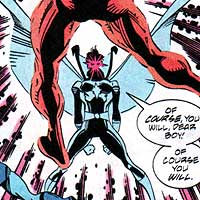 Starbreaker is an immensely powerful creature which thrives off of absorbed cosmic energy, usually destroying planets in the process. He is often referred to as a "cosmic vampire."

After Starbreaker escaped from the GUARDIANS OF THE UNIVERSE, he headed to the planet of Almerac, home planet of JUSTICE LEAGUE member Maxima (see HEROES OF THE PANIC IN THE SKY), where he was opposed by Booster Gold and the rest of the Justice League.

Starro the Conqueror was among the first villains to battle the JUSTICE LEAGUE. Through his ability to create miniature face-hugging, mind-controlling clones of himself, Starro has repeatedly threatened to dominate the minds of all humanity and take control of the entire Earth.

When a Starro clone is accidentally displaced through time, it takes control of RIP HUNTER and eventually the world. Booster Gold is forced to fight Starro's new minions, including Chemo, Chronos I, Gorilla Grodd, Solomon Grundy, and later Bane and Black Adam.

Later, Starro worked with the Justice League to save the universe, sacrificing himself in the process. But a tiny bit of Starro lived on as Batman's new sidekick, Jarro. 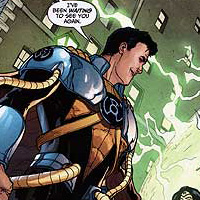 The SUPERMAN of an alternate Earth drawn into the DC Universe through the events of the Crisis on Infinite Earths, Superboy Prime spent years trapped in a pocket dimension where his loneliness and self-pity eventually led him to madness. After escaping from the GUARDIANS OF THE UNIVERSE, Superboy Prime renamed himself Superman Prime and joined the Sinestro Corps (see SINESTRO) in their war against the GREEN LANTERN CORPS.

Booster Gold confronted Superman Prime alongside the HEROES UNITED AGAINST SUPERMAN PRIME when the Sinestro Corps War threatened to destroy the Earth.

The SUPERNOVA suit, designed by RIP HUNTER and used by multiple heroes, can only be used by individuals sharing the DNA of Booster Gold. After Booster gives the suit to his ancestor DANIEL CARTER, it is stolen by Booster's own father for use as Supernova III in his quest for personal power with the TIME STEALERS.

Booster Gold spent years living in the shadow of his absent father before finally confronting him in battle in the skies above Central City.

The Supplier is an intergalactic merchant willing to sell anything to anyone for a fair price.

The Supplier was an early client of Blue and Gold Express, and their error in delivering a package led to a confrontation between the Supplier and Booster Gold, Green Lantern V, (see GREEN LANTERN CORPS), and Plastic Man (see CHRISTMAS PARTY GUESTS).