The following list represents the 534 heroes Booster Gold has encountered. Notes on methodology for the entries can be found here.

Like the GREEN LANTERN CORPS, the Darkstars were an organization that utilized power suits with great powers to bring order to the universe. The Darkstars were disbanded once their creators, the alien Controllers, felt that the majority of the Darkstars has been corrupted from their original mission.

Later, Booster traveled back in time through his own history with the JUSTICE LEAGUE, and accidentally crossed paths withe Darkstars investigating the theft of an inter-planetary doomsday device. 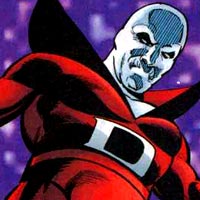 Boston Brand was risen from the grave to become an agent of the deity Rama Kushna known as Deadman. As a spirit, Deadman has the power to possess living creatures and force them to do his will.

Though Deadman has long been an active agent in the DC Universe, because of his ethereal agenda and incorporeal form, he has rarely crossed paths with the materially-minded Booster Gold. Booster Gold's first clear interaction with Deadman took place during the battle with DOOMSDAY, although Booster was completely unaware of Deadman's presence. 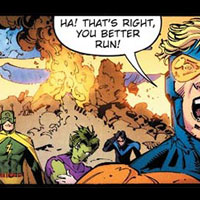 Faced with the eradication of all existance as they knew it, the heroes and villains of the Multiverse (both living and dead) united to confront the Dark Multiverse armies of the Batman Who Laughed. 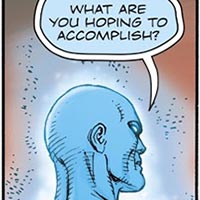 After an accident during a scientific experiment, nuclear physicist Jonathan Osterman was disintegrated on an atomic level. However, his consciousness survived, and he reassembled his physical body to become the super powered Doctor Manhattan.

Believing Doctor Manhattan to be behind an explosion that nearly killed Superman, Booster Gold and the heroes of Earth (including Atomic Knight, Red Hood, the Question, and Robby Reed as the Human Starfish) traveled to Mars to confront him. Doctor Manhattan proved more than equal to the task of defending himself. 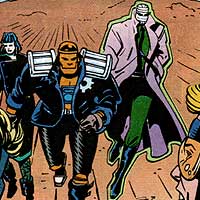 Niles Caulder, also known as the "Chief," assembled a team of misfit super heroes to serve his purposes. The team has had several different incarnations over the years with a great number of members.

Booster Gold likely first met the Doom Patrol when they assisted the other HEROES OF THE INVASION against the ALIEN ALLIANCE. For a time, the Doom Patrol headquarters were located within the SECRET SANCTUARY of the JUSTICE LEAGUE, the same location that BLUE BEETLE II frequently used to store his Bug.