The following list represents the 336 villains Booster Gold has encountered. Notes on methodology for the entries can be found here.

Roy G. Bivalo was a colorblind artist who turned to a life of crime as the Rainbow Raider out of jealousy of people who could see color. He was a frequent foe of the second FLASH.

Booster Gold was publicly embarrassed by the Rainbow Raider during one of the Raider's few excursions outside of his hometown of Central City. The Raider was extracting personal revenge against artist Paul Morris.

Furious over the treatment his native planet Ysmault received from the GUARDIANS OF THE UNIVERSE, Atrocitus murders his fellow Five Inversions (Kultonius, Qull, Qurr, Worz) and uses their essence to form the Red Lantern Corps, channeling his rage into the power to extract revenge upon the universe. 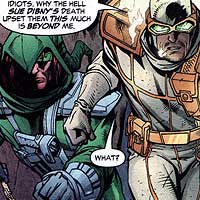 Foes of the FLASH ally themselves into a loose-knit group of villains calling themselves the Rogues Gallery, or Rogues.

Booster Gold has encountered individual members of the Rogues' Gallery on several occasions. Ironically, Booster's first meeting with multiple Rogues working as a team was with Heatwave and Pied Piper, two former Rogues who had been at the time acting as heroes.

Roulette is the mysterious owner of the House, an underworld gladiatorial arena pitting super powered opponents against one another. She may have ties to the original Mr. Terrific (see JUSTICE SOCIETY OF AMERICA).

Booster Gold and his fellow SUPER BUDDIES were abducted by Roulette for the purpose of an organized melee of brainwashed superheroes. Roulette was careful to ensure that none of the heroes she abducted were ever aware of her identity.

The card-themed ROYAL FLUSH GANG have gone through many members in their long, infamous criminal career, but they almost always include a Ten, Jack, Queen, King, and Ace in their ranks at any given time.

MAXWELL LORD surreptitiously arranged for the Royal Flush Gang to be Booster Gold's rather public audition for JUSTICE LEAGUE membership. 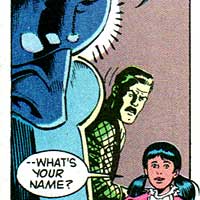 Founded in the 20th century, the Rubenico Gambling Syndicate will be among the most influential criminal organizations in the world by the 25th century.

When Michael Jon Carter needs money for his mother's medical treatment in the 25th century, he will turn to Snake Eyes, a local representative of the Rubenico Syndicate. As a hero in the 20th century, Booster Gold will attempt to topple the Syndicate's founder, crippling the criminal empire before it can gain momentum. The 20th-century Rubenico Syndicate was brought to Booster's attention when they threatened the lives of the computer hackers Jack Marshall (Hacker) and Toby Kwimper (Doctor Demosthenes).