The following list represents the 333 villains Booster Gold has encountered. Notes on methodology for the entries can be found here. 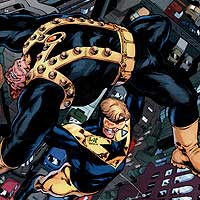 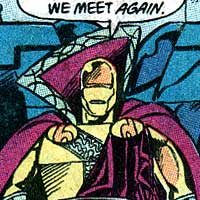 Lord Manga Khan is the absolute ruler of the Cluster, an intergalactic merchant organization that employs its own sets of rules in dealing with merchandise. He is often surrounded by robotic assistants such as L-Ron (see JUSTICE LEAGUE), who appear to make up the majority of the Cluster.

Booster Gold first encountered the Cluster when it launched an attack on Earth in search of marketable goods. It was some time later before Booster met Manga Khan face-to-face on the plant of Apokolips. 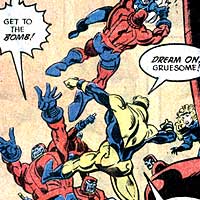 The Manhunters were created by the GUARDIANS OF THE UNIVERSE as predecessors to the GREEN LANTERN CORPS. When the Oans triggered the Millennium evolution of the human race, the Manhunters opposed the project.

The Manhunters used extortion to force Booster Gold to turn traitor on the JUSTICE LEAGUE and join the Manhunters against the HEROES OF THE MILLENNIUM. 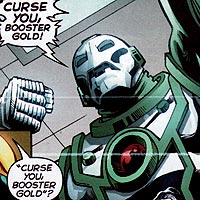 Bill "Bob" Castell was an actor who agreed to play the part of the super terrorist Manthrax for pay.

Manthrax threatened a Metropolis subway until Booster Gold opposed him. There was little danger for Booster in the encounter, as he was the one who paid Manthrax to attack the subway in the first place. 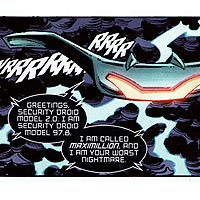 Much to Skeets' dismay, he discovers that he has an arch-enemy when he and Booster Gold confronted Supernova III to save the history of the second FLASH. 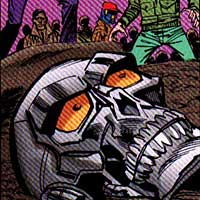 John Corben is a nigh-indestructible cyborg called Metallo, "The Man with the Kryptonite Heart."

While searching for Superman, Booster Gold passed an incapacitated Metallo following his defeat to the combined might of Scorn (see SUPERMAN) and Superman. 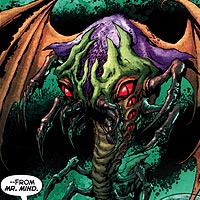 Mister Mind is a criminal mastermind from the planet Venus. He has opposed the heroes of Earth, most notably Captain Marvel (see JUSTICE LEAGUE).

Although he was completely unaware of it at the time, Booster Gold met Mister Mind long before Mind revealed himself as a threat to the new multiverse following the Infinite Crisis. 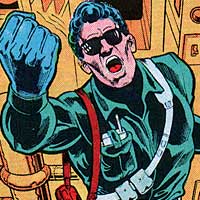 Very little is known about the man who calls himself Mister Twister, other than the fact that he once used a very large bomb to threaten the citizens of Metropolis.

When Mister Twister interrupted a hockey game with a bomb, Booster Gold arrived on the scene to defuse the situation. This earned Booster the admiration of Detective Stone of the Metropolis Police Department.

Monarch I was a dictator from ten years in the future when he first arrived to threaten the world. Returning to the present, he triggered his own creation by interacting with Hank Hall, better known as the hero Hawk (see TEEN TITANS). When Earth's heroes defeated him, changing his history, Monarch changed his plans and motif (see EXTANT) and passed his technologically advanced suit of armor to his successor, Nathaniel Adam. The armor allowed Monarch II, an alternate universe version of CAPTAIN ATOM, to escape his interdimensional prison and travel to Earth. 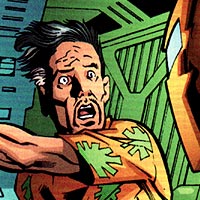 Scientist T.O. Morrow, aka Thomas Oscar Morrow, invented a device that allows him to view television broadcasts from the future. Using the technology of tomorrow, Morrow has embarked on a life of crime to fund his research. Morrow is most famous as the creator of the android Red Tornado, member of the JUSTICE LEAGUE.