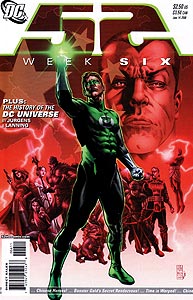 Brief Synopsis: In the new world, international heroes step into the spotlight.

Page 1, panel 4
"Week 6, Day 1." Booster Gold has hired an actor to portray a super-powered villain so that Booster could publicly defeat him. The pretend villain, Manthrax, is visually inspired by Marvel Comics' Iron Man character. Booster has experience with the concept of hiring villains to make heroes look good. He was accepted into the Justice League after battling the Royal Flush Gang, which Maxwell Lord had hired for the occasion.

Page 2, panel 1
PRODUCT PLACEMENT: A young boy watching WMET-TV's coverage of the Manthrax attack on Metropolis' Midtown Train Station plays with a Booster Gold doll. A Martian Manhunter doll and Booster Gold comic book are visible at the child's feet. The approximately 12-inch tall Booster doll is probably from the Booster Gold Line of Action Toys. Since Martian Manhunter would not sanction the creation of a toy based on his likeness, it presumably is from the same line, as Booster has no qualms about making a dollar on his fellow Leaguers' likenesses (as seen in Secret Origins, Vol. 2, #35).

Page 3, panel 2
Booster departs with the head of the Manthrax costume which he clearly provided for the actor. How Booster was able to scrounge together a costume for a fictional nemesis is unrevealed. However, Booster does have extensive experience with armored power-suits.

Page 18, panel 1
"Week 6, Day 2." Booster and Skeets II arrive at the Arizona desert bunker of Rip Hunter. Booster has quite a history with Hunter first introducing the character into post-Crisis on Infinite Earths DC Universe continuity in Booster Gold #13. Booster prophetically wonders if Rip is preparing for World War III, an event which will be depicted in future issues of 52. 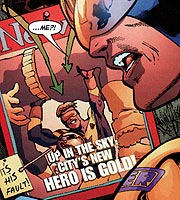 Page 18, panel 5
Booster's stated hatred of "time travelers" may reveal a little self-loathing. Few current DC characters have traveled through time as often as Booster Gold has. Skeets reveals that Rip Hunter's computer lock is powered by a Kord Omniversal computer, a predecessor of Skeets's central processor. This means that Blue Beetle II is the creator of technology that will one day lead to the ability to construct Skeets in the 25th century.

Page 20, panel 1
SCHOOL'S IN: First appearance of Rip Hunter's Blackboard. The notes covering the blackboard cryptically hint at events happening throughout the DC

Page 20, panel 2
EXTRA, EXTRA: Inside Hunter's bunker, amid a number of cryptic messages including some that seem to blame Booster for an unknown crisis, Booster finds a copy of NewsTime Magazine showing his defeat of Mammoth from 52 Week One.

Boosterrific Review: There's something physically painful about watching a hero sow the seeds of his own downfall as Booster Gold does at the beginning of this issue. It's a train wreck that you can't turn your eyes away from, and that's just the first three pages.

This issue is better than average for this young series (which is saying something, as the issues so far have all been pretty darn good). Each new situation implies a larger story lurking behind it. The dialogue is full of hints and teases about things to come. If there is anything disappointing about this issue, it is the suspicion that the inevitable pay off cannot be as good as the setup.