The following list represents the 331 villains Booster Gold has encountered. Notes on methodology for the entries can be found here. 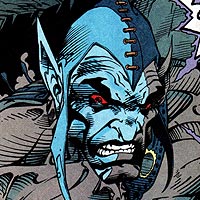 Before the SEPCTRE was the personification of the Spirit of Vengeance, Eclipso held that title. Reawakened centuries later by Bruce Gordon (see SHADOW FIGHTERS), Eclipso returned to regain the power that had once been his to wield.

Booster Gold first encountered Eclipso when he dominated JUSTICE LEAGUE member Maxima. Later Booster would join the other HEROES UNITED AGAINST ECLIPSO in an ill-fated assault on Eclipso's moon stronghold. 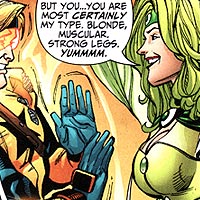 Emerald Emerald is a long-time foe of the Legion of Super-Heroes. Often allied with the Fatal Five, Emerald Empress utilizes the powerful Emerald Eye of Ekron in her crusade against order.

Booster Gold struggled to defend a busload of ill-fated, including Earthling Jennaux Riel, from Emerald Empress' bloodlust during their first encounter on the planet Daxam during the Great Darkness War. 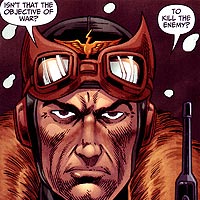 Booster Gold was captured by Enemy Ace during an unintended visit to the battlefields of World War I, at which time Booster was impressed by von Hammer's honor and virtue despite his fearsome reputation. 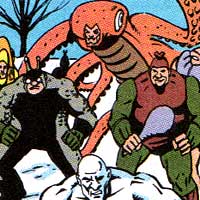 Eurocrime is a criminal organization composed of members from throughout Europe, each with a food motif.

Booster Gold and the JUSTICE LEAGUE confronted Eurocrime when the criminals were employed by SONAR. 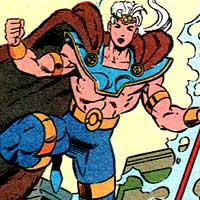 Ewald is the brother of JUSTICE LEAGUE member Ice (see FIRE & ICE) and the heir to the throne of their ice kingdom.

When Ewald, corrupted by the influence of the OVERMASTER, overthrew his father and imprisoned Ice, the Booster Gold and the Justice League responded to the plea of Ice's mother, Queen Olaf, and rushed to Ice's aid. 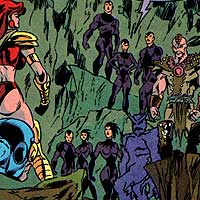 The Ruling Council of Exor, made up entirely of sets of twins native to the planet Exor, were willing to sacrifice their citizens to slavery in order to obtain powerful technology from the Slavelord.

Booster Gold and EXTREME JUSTICE sided with rogue Exorians Zan and Jayna (see WONDER TWINS) against the Ruling Council in order to wrest control of the powerful Flesh Driver armor away from the corrupt Ruling Council.

Determined to manipulate history to his own fiendish desires, Hank Hall (formerly known as Hawk, member of the TEEN TITANS) abandoned his role as MONARCH to assume the alter ego of the villainous Extant.

Extant's meddling with history initiated the crisis known as Zero Hour. As one of the HEROES OF ZERO HOUR, Booster Gold was affected by Extant's plans when he battled a displaced city from his native 25th century. Booster would later encounter Extant and another Zero Hour villain, Parallax, during a trip through the timestream with RIP HUNTER. 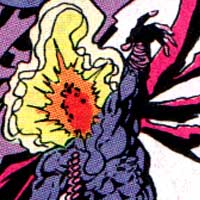 The Extremists were the preeminent team of super villains of the alternate universe world of Angor. Following the destruction of their world, the ethereal Dreamslayer traveled to Earth and continued his rampage with robotic duplicates of his deceased teammates. The robots were constructed by the idiosyncratic Mitch Wacky, along with the ASSEMBLERS, one of the few survivors of the destroyed world of Angor.

While the European branch of the JUSTICE LEAGUE often found themselves at odds with the Extremists and anecdotal evidence indicates that Booster Gold may have battled the Extremists in the past, Booster Gold did not directly combat Dreamslayer until he commanded the NEW EXTREMISTS.