The following list represents the 333 villains Booster Gold has encountered. Notes on methodology for the entries can be found here.

OMAC, or "Observational Meta-human Activity Construct," units were designed to be the remote agents of Checkmate (see SARGE STEEL) and the BROTHER EYE satellite. They are created by exposing human beings to a nanite virus. Infected humans become carriers of the nanites, which at the command of the Brother Eye, can transform the infected human into a powerful device to perform directed tasks.

Booster Gold and several other former members JUSTICE LEAGUE battled OMACs to save their companions MARTIAN MANHUNTER and Rocket Red #4 (see HEROES OF THE SOVIET UNION). OMACs would continue to be a tool of MAXWELL LORD, ultimately developed by Professor Ivo into the powerful OMAC Prime model.

After the events of Flashpoint, Maxwell Lord forced Kevin Kho to become OMAC IV who eventually turned to Booster Gold and the Justice League International for help. 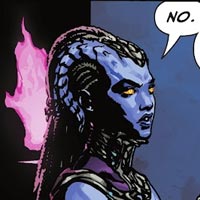 Omnizon is the daughter of Lord Kif'n of the alien world Beh'imoor, which claims Earth as part of its galactic empire.

Led by highly-decorated General Synge, Operation Freedom Rings was an organization of rogue elements of the United States Air Force that were determined to save the world from Communist oppression through the implementation of bio-engineered super soldiers.

When the EXTREME JUSTICE team selected MOUNT THUNDER, Nevada as their base of operations, they inadvertently crossed paths with operatives of Operation Freedom Rings.

The Overmaster traveled through the galaxies, passing judgment and destroying planets that failed that judgment.