“Revenge of the Rainbow Raider” 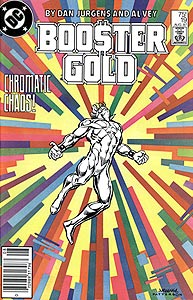 Cover Description: Booster Gold appears in black and white at the center of a radiating color pattern.

Issue Notes: After months of near-rabid debate by fans in the "Gold Exchange" letter column, Booster has grown his short, spiky hair out and returned to his "classic" hairstyle in this issue.

Page 1, panel 1
A narrative balloon states that B.G.I. computer division lost a $3 billion project deal to Lexcorp. Within just a few months, Goldstar Inc. has grown to compete on the level with established, wealthy corporations such as Lexcorp and Wayne Enterprises. Booster comments that in one day he's lost more money "than some small countries are worth." Three billion dollars is more than the Gross Domestic Product (GDP) of over 60 countries in 2006.

Page 2, panel 1
In addition to investing in stocks and business ventures, Booster plans to become an art collector, buying art that will escalate in value in a few years.

Page 3, panel 8
Booster is stunned that artist Paul Morris won't sell his paintings to him on an ideological basis. "To think that insanity like that exists," says a stunned Booster. Indeed.

Page 4, panel 1
Appearance of the Rainbow Raider. The villainous Raider first appeared in Flash, Vol. 1 #286 in June 1980, and has returned to battle the "fastest man alive" on several occasions. Though this is one of the Raider's few battles against a hero other than Flash, it only makes sense that a villain with a color gimmick would show up to battle a hero named "Gold."

Page 5, panel 2
The Rainbow Raider calls Booster a "cheap cereal huckster." Being called cheap by the Rainbow Raider definitely qualifies as insulting. The Raider proceeds to explain what his goggles can do.

Page 6, panel 1
The Rainbow Raider turns his fear inducing yellow beam on Booster, effectively removing him from the fight. This is the second time in Booster's short superheroing career that he has been mind-controlled by a villain (see Justice League Annual #1). It will not be the last.

Page 6, panel 3
In an unusual move for a villain planning a getaway, the Rainbow Raider spouts his true identity, Roy G. Bivolo, to a gathered crowd of art patrons and Booster Gold. His name is based on the acronym for the color spectrum in a rainbow: Red, Orange, Yellow, Green, Blue, Indigo, Violet, often abbreviated as "ROYGBIV."

Page 7, panel 5
Seeing Booster chicken out against a "class C villain," Lois Lane begins to wonder if she can win a Pulitzer Prize for an expose on Booster Gold. The coveted Pulitzer is a prize awarded to outstanding achievement in journalism. At this point in the continuity of post-Crisis on Infinite Earths comic book DC Universe, Lois has never won one. This is the second meeting between Booster Gold and Lois Lane (see Booster Gold, Vol. 1, #7).

Page 12, panel 1
EXTRA, EXTRA: Lois' editorial scathing Booster Gold appears on the centerfold page of the Daily Planet newspaper. Lois mentions that Booster has appeared on Late Night with David Letterman, has subbed for Johnny Carson on The Tonight Show, and has danced the tango (poorly) with Joan Rivers on The Late Show. (Whether it was Rivers or Booster who was the poor dancer remains a mystery.) The editorial also reproduces the cover of Booster Gold, Vol. 1, #16, identifying it as a photo from the B.G.I. Corporate Report for 1986. However, B.G.I. wasn't officially formed until the year 1987, as depicted in issue #16 itself.

Page 13, panel 3
Booster admits that he is an opportunistic self-promoter, but he refuses the label of "hero for hire." "Hero for Hire" is the nickname of Marvel Comics' Power Man.

Page 15, panel 2
Michelle Carter is driving a Porsche 911 Targa. The Porsche 911 is one of the longest produced and most influential cars in automotive history.

Page 16, panel 3
Using a B.G.I. MasterCard, Michelle checks into a hotel under the assumed name "Trixie Carter." This is a combination of Trixie Collins, Booster's secretary, and her own last name. 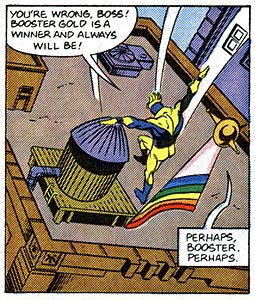 Page 20, panel 3
Booster uses the colloquialism "won't be worth a Confederate dollar" during his second encounter with the Rainbow Raider. Though at the conclusion of the American Civil War in 1864, the much-counterfeited Confederacy currency was indeed worthless, by 1985, Confederate dollars could fetch a pretty penny from numismatists (coin collectors).

Boosterrific Review: The long-awaited story of Booster Gold versus the Rainbow Raider! While "long-awaited" may not be exactly the right adjective to use, the sentiment in the previous sentence is not insincere: we love to see Booster Gold interact with established elements of the DC Universe, especially the more obscure characters and foes of famed Justice Leaguers. These interactions build the background mosaic of the DC Universe into a vibrant and fertile environment for the typical adventures and morality tales of the super hero genre of stories.

The pace of this issue is staggering, establishing subplot after subplot: Booster versus Rainbow Raider, Booster versus bad publicity, Booster versus insurance fraud, and even setting up the Booster versus the Dimension X aliens storyline which will not be relevant for 2 more issues. Juggling all of these stories makes the book read as more television soap opera than the action/adventure hero story that writer Dan Jurgens usually provides. Adding to this genre-jumping feeling is the inking of Al Vey, whose technical lines and minimal use of shading fittingly allows more color in the book, a style of which the Rainbow Raider would certainly approve.

(2 votes)
BoosterPowershot (Oct. 5, 2010, 01:22:23)
I actually enjoyed this story much more than I expected I would, and the second part was a good closer.
KMD (Nov. 11, 2009, 15:13:58)
A bit too rushed to be honest. I did not care for the Rainbow Raider as the chief bad guy-he's just not that interesting. Booster's entry into the 20th century art world is funny, especially for right of center art critics and readers of the "New Criterion" like yours truly.