5. Wednesday, October 13: Old Friends Are the Best Friends
In which we welcome back Booster's first 20th-century friend, the original Goldstar, Theresa "Trixie" Collins to the pages of Blue and Gold #3!

4. Wednesday, June 16: This Day in History: Black and Gold
In which we take a look back at the time Booster Gold took Black Canary to Paris in Justice League Annual #1 (1987).

3. Tuesday, October 19: Coming Soon: Blue and Gold 6
In which we reveal the advance solicitation for Blue and Gold #6 with Blackguard on the cover. In hindsight, that cover was used on Blue and Gold #4. What will be the cover actually be on issue 6? I guess we'll find out on February 15, 2022.

2. Monday, April 26: The History of Blue and Gold, Part 1
In which we investigate how a comic book series first announced in 1988 took 33 years to actually reach readers. (This was the first in a three part series. Follow these links to Part 2 and the Dan Jurgens interview in Part 3.)

1. Tuesday, July 20: New Release: Blue and Gold 1
In which we celebrate the release of the long delayed debut of Booster Gold/Blue Beetle team-up book Blue and Gold #1! This was the highest hit count Boosterrific.com had received in a single day in the history of the site! (Second place isn't even close.) People sure do love them some Blue and Gold!

Here's to another Boosterrific year in 2022!

Like my favorite super hero, I'm planning to start the year watching my alma mater play football. In the meantime, I present for your nostalgic enjoyment the 5 most-read Boosterrific.com blog posts of 2020, presented in ascending order of hits:

5. Monday, April 6: This Day in History: Without Great Power
In which we revisited Booster Gold's participation in Justice League Europe #50, his first taste of superheroic action after losing his powersuit to Doomsday. Say what you will about his motivations, but Booster Gold's got guts.

4. Friday, March 13: That Time Booster Gold Defeated a Disease
In which we took at look at the events of Booster Gold Volume 1 #17 in light of the pandemic that was sweeping the globe. Conclusion: an impenetrable force field is better than a vaccine.

3. Monday, October 26: The Strong and Silent Type
In which I improved Superman & Batman Magazine #8 by cutting out most panels that don't include Booster Gold. Sorry, I couldn't do anything about that bulky 1990s power suit.

2. Monday, November 9: Two of a Kind: Shattered and Forged
In which we clear up the confusion surrounding DC's announcements of Generations: Shattered and Generations: Future State comic books. Hint: they're the same book. Or, at least we think they are. We'll be more certain when we finally have the book in our hands next week.

1. Friday, December 18: The Best of Booster Gold: Action Comics 995
In which we conclude our year-long series of the 12 best Booster Gold comics. (Maybe those clickbait comic book listicle sites are onto something.)

While I would have expected the announcement of Booster Gold's return to Action Comics to be the most read post of 2017, it wasn't. (That post came fourth, by the way. By 7 hits.)

Instead, the honor belongs to our "celebration" of the most important comic event occurring exactly 25 years ago October 20: the beating of Booster Gold by Doomsday! 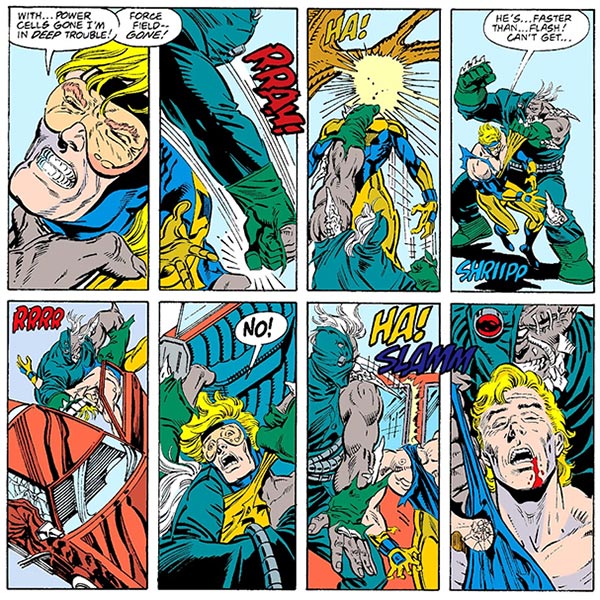 Booster boosters will recall that it was Booster Gold who named Doomsday. Judging by how he treated our hero in return, it seems Doomsday didn't much care for it. Perhaps he would have preferred "Brother Love."

Thanks for visiting Boosterrific.com in 2017. Let's make 2018 even better.