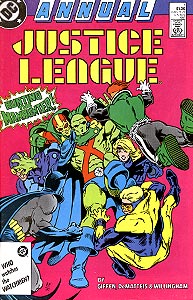 Brief Synopsis: When Kord Industries accidentally releases a sentient microorganism, the Justice League must intervene to save the world.

Issue Notes: Though released in September 1987, an editorial balloon on the title page indicates that the events of this issue take place "just after" Justice League #4. That would mark this as Booster Gold's first mission as a member of the Justice League.

Page 5, panel 1
While Black Canary, Blue Beetle, and Mister Miracle play poker and Batman argues with Guy Gardner, Booster Gold is shown standing near Martian Manhunter. It is soon revealed that Batman, Dr. Fate, and Martian Manhunter were interrupted from a "business meeting," which Booster is presumably attending. This is Booster's first contact with Dr. Fate.

Page 8, panel 1
Booster's first mission as a member of the famed Justice League teams him with Black Canary on a trip to Paris, a city that Booster has never before visited.

Page 10, panel 1
Dr. Fate teleports Booster and Canary from Rhode Island, United States to Paris, France near the Eiffel Tower. There is a 6-hour difference between the East Coast of the U.S. and Paris, explaining the difference in time of day. 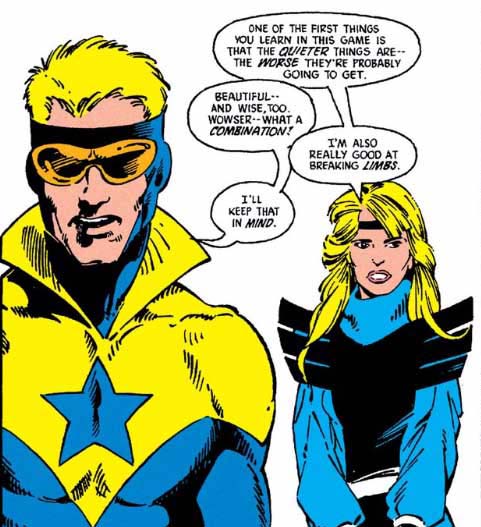 Page 10, panel 5
Booster and Canary are apparently arriving at the American Hospital of Paris (l' Hospital Americain de Paris), a Parisian hospital with a tradition of using United States trained medial professionals to treat the vast number of American ex-patriots in Paris. It seems that the hospital, on the west side of Paris, is "right next" to the Parisian branch of Kord Industries.

Page 11, panel 1
Black Canary is quick to give the amorous junior Leaguer Booster Gold pointers about "super-heroing." As Canary is a second-generation heroine herself (her mother, Black Canary I, was a member of the original Justice Society of America), Booster would do well to pay attention.

Page 13, panel 7
Booster is the second Justice Leaguer to fall to the mind-control power of the sentient cell. (What else would you expect from the rookie Leaguer?)

Page 32, panel 2
Booster joins the mind-controlled Batman, Black Canary, and Mister Miracle in an attack on Martian Manhunter. Note that the first person that Booster attacks as an active member of the Justice League is fellow Leaguer Martian Manhunter. Booster's Booster Shots have never been effective against Superman, and as should be expected, they appear to have little effect on Martian Manhunter, either.

Page 38, panel 3
After Dr. Fate and Manhunter neutralize the cell, Booster is present but silent. Batman's comments would indicate that those who were controlled by the cell have no memories of what they did while under the cell's command, so Booster cannot be blamed for his assault on Manhunter.

Boosterrific Review: Booster Gold does not acquit himself especially well in his first adventure as a Justice Leaguer in this annual that reads like an oversized issue. But I mean that in the best possible way, as the story is engaging, unique, well characterized, and a good excuse to pit Justice Leaguers against one another.