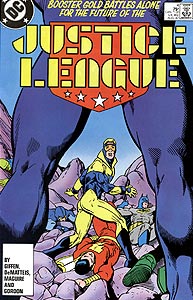 Cover Description: Seen from between the muscular legs of an undisclosed humanoid, a surprised Booster Gold is standing among the fallen bodies of Justice Leaguers (from left to right) Martian Manhunter, Blue Beetle, Captain Marvel, Batman, and Guy Gardner.

Brief Synopsis: Rather than argue with Batman about Maxwell Lord's qualifications to invite him into the Justice League, Booster Gold leaves the League's headquarters only to find himself face-to-face with the Royal Flush Gang.

Issue Summary: As Batman and his Justice League debate what to do about the mysterious Maxwell Lord and his "new members" Doctor Light and Booster Gold, Doctor Light becomes fed up with Lord's manipulation and storms out. Realizing that his dream of joining the League is rapidly becoming a nightmare, Booster also leaves the Secret Sanctuary.

Booster prepares to confront the assembled press outside the gates when the Secret Sanctuary defenses go offline, allowing some suspicious characters inside. Booster investigates and interrupts the latest plot of the Royal Flush Gang.

The rest of the League silently observes Booster's victory over King, Queen, Jack, and Ten. Ace, however, appears to be Booster's match, forcing the League into action. In the end, it's the quick-thinking of Booster Gold -- with a timely assist by Blue Beetle -- who succeeds in defeating the android Ace. Pleased by Booster's performance, Batman accepts Booster into the Justice League.

Issue Notes: This issue represents Booster's first action with the Justice League, though he is not declared an official member until the issue's final page, after the conclusion of the battle with the Royal Flush Gang. This issue represents Booster's first appearance on a Justice League cover, and his first appearance on any cover other than an issue of the eponymous Booster Gold.

Page 3, panel 6
When Dr. Light storms out of the headquarters in disgust of the situation that Maxwell Lord has put her in, Booster tries to act as peacemaker, a role for which the impulsive Booster is ill-suited.

Page 5, panel 1
Rather than allowing himself to become drawn into Lord's plan for the League, Booster leaves in much the same manner as Dr. Light did previously, a role for which he is much more suited.

Page 6, panel 1
MEET THE PRESS: Rather than fly away and save face, Booster chooses to approach the press waiting at the gates to discuss his relationship with the Justice League. This can be interpreted as either a case of strong character or a need for attention.

Page 8, panel 4
When Booster investigates the sudden failure of the Justice League's security gates, he encounters the Royal Flush Gang. Though he has never seen them before, he recognizes them on sight.

Page 10, panel 1
Rather than join Booster in his fight with the invaders, Batman holds the Justice League back so that he can observe and evaluate Booster's actions. Though Batman and Booster have previously met, Batman was not in a position to watch Booster in a fight. 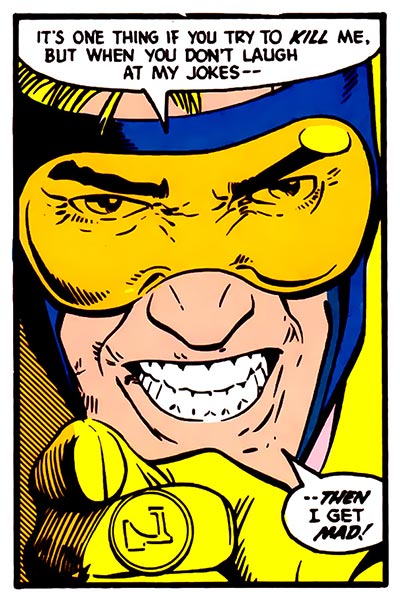 Page 13, panel 2
Booster comments that his motivation for watching so much 20th-century television is so that he can "make a few funnies." (Um, yeah. That explains the enduring popularity of Family Ties.)

Page 13, panel 8
HIS STORY: Booster has absolutely no qualms about hitting women combatants. As he explains, "where I come from, equality of the sexes is a given, so we can hit anyone."

Page 14, panel 6
With the fight apparently over, Booster learns that he has earned the approval of the assembled Leaguers, including Batman, a difficult feat that even famed Green Lantern Hal Jordan has had difficulty accomplishing.

Page 21, panel 1
Working together, Blue Beetle and Booster Gold manage to stop the powerful android Ace. This is the first time that the two have worked together, forming the basis for a friendship that will last for years.

Boosterrific Review: This comic book may contain quite simply the greatest Booster Gold story ever written. Keith Giffen crafts a story featuring Booster Gold, allowing writer J.M. DeMatteis to capture the vibrancy, loneliness, intelligence, and good humor of Dan Jurgens' Booster Gold and then present them all flawlessly and with a great touch of comedy. As Booster struggles to save the Justice League, he displays all of his best traits in memorable fashion. And it certainly helps that the art of Kevin Maguire and Al Gordon art make him look so good while he's at it. This is the "don't miss" issue of Booster Gold's nascent career, and will no doubt be a measuring stick for all future Booster Gold adventures.

(1 vote)
KMD (Nov. 11, 2009, 15:06:59)
Great issue. Booster makes a memorable show against the Royal Flush gang and his public hero persona and his lonely inner character are both on display.