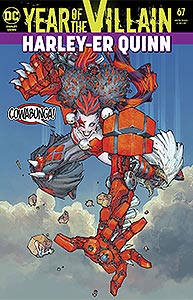 Cover Description: This book has an acetate outer cover featuring art of Harley Quinn falling in some sort of power suit. The inner art has a more familiar Harley falling. Neither cover features Booster Gold.

Issue Notes: Booster Gold appears in this issue only as a character in a comic book owned by Harley Quinn.

Story Notes: In this meta-textural comic-within-a-comic story, both Harley and Booster appear to be aware of themselves as comic book characters. They interact with the history of the DC Universe in a non-canonical way.

This story has been reprinted in:
Harley Quinn: The Final Trial (2020)

Page 2, panel 1
In a comic book within this comic book, Booster Gold and Harley Quinn fall through time on their way to revisit (and prevent) the original Crisis on Infinite Earths. Booster's presence here is never fully explained. Presumably he was included simply to give Harley a means to travel through time.

Page 11, panel 1
Next, Booster and Harley end up in Alexander Luthor's pocket dimension prior to the events of Infinite Crisis. This art was created by Aaron Lopestri and Matt Ryan. Booster Gold appears sans collar. Did Harley bring the wrong Booster into the past?

Page 17, panel 2
Booster and Harley finally reach their goal, the events of Crisis on Infinite Earths. (Note that the Crisis takes place before Booster Gold was introduced to the DC Universe.) This art was created by Tom Derenick and Trevor Scott. Booster once again wears his (period appropriate) high-collar.