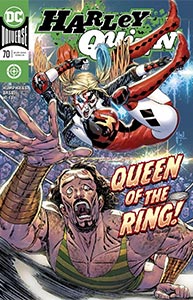 Cover Description: Harley Quinn drops an elbow on her opponent from the top rope of a wrestling ring. (No Booster Gold.)

Brief Synopsis: Harley Quinn has relocated to Los Angeles and taken a job as a professional wrestler as she deals with the loss of her mother.

Issue Summary: Harley Quinn lies, badly wounded, in the back of an ambulance. Seeing that the reader is looking, she begins her story.

Harley Quinn has become a professional wrestler in Los Angeles, California. Her tag teem partner is her new best friend, Jade Feather. But the wresting promoter, Baby Face, wants the two friends to fight one another in a fixed fight. Harley refuses, but later relents after a discussion with Jade and Jade's daughter, Becca.

While trying to salve her wounded feelings at a bar, Harley runs into Booster Gold singing karaoke. He buys her a drink, and provides a sympathetic ear for her problems.

Harley wrestles her friend and wins only to later discover after the match that someone has murdered Jade Feather in the showers.

This story has been reprinted in:
Harley Quinn: Hollywood or Die (2021)

Page 16, panel 1
Booster Gold sings karaoke in a Los Angeles bar. According to writer Sam Humphries (via Twitter.com), the song is fictional for legal reasons, but was inspired by the real song "For Crying Out Loud" from the 1977 Meat Loaf album Bat Out of Hell. Booster isn't wearing his usual costume (possibly also for legal reasons), but he does have his collar popped, so we can be sure it's really him. (Frankly, this is the most "in-character" thing Booster Gold has done in a DC comic in months.)

Page 16, panel 2
Harley Quinn is in a bar drowning her sorrows when she is approached by Booster Gold. Compare this scene to the meeting between the two characters in the first issue of Heroes in Crisis, where Booster was the one moping at the counter. 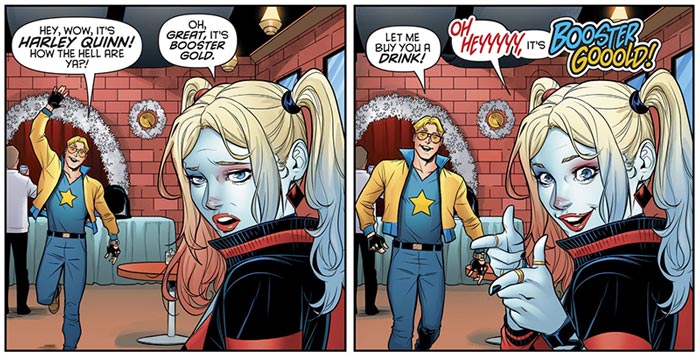 Page 17, panel 1
Speaking of Heroes in Crisis, Booster references the "murder of dozens of superheroes" in a very offhand manner. Humor and an arrogant facade have always been Booster's preferred coping method, but perhaps it would be better for everyone if we all simply pretended that never happened. (Can you imagine yourself in Booster's position in Heroes in Crisis and then, less than a year later, finding yourself having a drink with the person who tried to kill you? No, me neither.)

Page 18, panel 4
Ok, I cannot be mad at Booster's portrayal in this issue if he's going to be insightful, honest, and compassionate. "Damn you, Booster Gold," indeed.

Boosterrific Review: I'm already on record as no big fan of Harley Quinn or her series — Why is she suddenly in L.A? How is being a pro wrestler laying low? Who would hire a famous killer to be in their entertainment company? Is there no connective tissue here?) — so I was strongly resistant to Booster's appearance here. Despite the obligatory hat tip to the best-forgotten Heroes in Crisis, the nascent relationship between Booster and Harley is treated sensitively. Therefore, I'm willing to give them a second chance on a murder-mystery team-up.