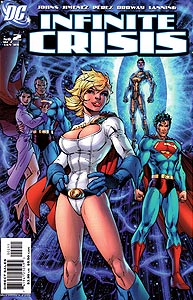 Cover Description: Each issue of Infinite Crisis has multiple covers. The two covers to this issue both feature Power Girl. (Neither includes Booster Gold.)

Brief Synopsis: The multiple crises facing the Earth and beyond intensify.

Issue Notes: This mini-series is essentially a direct sequel to the Crisis on Infinite Earths miniseries published 21 years earlier in 1985. This issue includes Booster Gold's return to the present from his "home" in the future.

Page 17, panel 8
Booster Gold appears in a flashback in his original Mark I costume as depicted on the cover of Booster Gold, Vol. 1, #4, including his long-discarded cape and segmented star logo. Booster is included here among the symbols of the post-Crisis on Infinite Earths DC Universe, when the updated chronology of the modern era was viewed as optimistic and heroic. Since that time, especially in the wake of the Identity Crisis, the DC Universe has grown much darker and more dangerous. 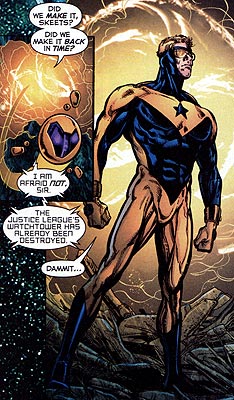 Page 20, panel 3
Booster Gold returns from the future to arrive in the ruins of the lunar JLA Watchtower, destroyed by Superboy II in JLA #119. Booster's latest trip through time appears to have occurred in much the same manner as that of the Terminator in the popular movie of the same name. The primary difference is that unlike the Terminator, Booster does not appear in the present without any clothing.

Page 20, panel 4
Accompanying Booster back to the past is a new version of Skeets. The previous Skeets, revealed to be destroyed in the pages of Countdown to Infinite Crisis #1, was a security robot while the new Skeets is designated a valet. Still an oblong golden orb, this version of Skeets appears to have replaced its three fixed fins with free-floating bits of golden metal. It is unclear from what point in time Booster salvaged this Skeets II, (or whether this Skeets utilizes a previous version of the disassembled Skeet's recorded personality) but Booster's robot sidekick is performing the same function that he performed in Booster's earliest appearances: adviser and historian.

Page 20, panel 5
FASHION ALERT: Booster wears a new costume, presumably a new version of the Mark I power suit originally stolen from the Space Museum of the 25th century. This new, Mark I.v2 suit lacks the collar of Booster's Mark I suit, and a gold stripe runs the length of Booster's torso and arms, unifying the gold fields previously broken by bands of solid blue.

Page 20, panel 6
HIS STORY: Booster has arrived too late to serve his primary goals, whatever they might have been. They likely included saving Blue Beetle. Unable to return to travel further back in time, where he once again is a wanted man, Booster sets off to find the Blue Beetle's scarab and contact "my League" in order to save the lives of "millions of others. Maybe Billions." Booster always did think big.

Boosterrific Review: Rarely is an epic story told as well as Geoff Johns has so far managed in Infinite Crisis. Events have the feel of a natural, organic development amplified by the emotions of interactions between long-established characters. The drama of the story clearly escalates as the issue progresses without ever becoming forced or insincere. Add to this praise the fact that the art team led by Phil Jimenez is rendering an endangered world of unique and realistic characters. This may be the best crossover in DC Comics' history.