Cover Description: Suicide Squad members (from right to left) Javelin, Rick Flag, Bronze Tiger, and Captain Boomerang are in the foreground being attacked by Justice League members Guy Gardner, Batman, Blue Beetle, and Mister Miracle, respectively (No Booster Gold.) The cover of this issue is the flip side of the cover to Justice League International #13.

Brief Synopsis: The Suicide Squad is opposed by the JLI while attempting to rescue a comrade from a prison in the Soviet Union.

Issue Notes: The events of this issue are continued from Justice League International #13.

Page 1, panel 1
Booster Gold and fellow Justice League members (from left to right) Captain Atom, Black Canary II, Martian Manhunter, Rocket Red #4, Guy Gardner, Batman, Blue Beetle II, and Mister Miracle face the Suicide Squad. This continues from Justice League International #13 Booster's first meeting with Rick Flag and the Suicide Squad and all of the villains who make up its current membership: Bronze Tiger, Captain Boomerang, Deadshot, Duchess, Javelin, Nightshade, Vixen. (Ironically, Vixen is a former Leaguer.) The uniform of new JLI member Rocket Red #4, Dimitri Pushkin, instead displays the number "7" throughout this issue. This is not the only time that Dimitri Pushkin will be shown in suit number "7," the armor of deceased Manhunter Vladimir Mikoyan (see Justice League International #9). The same mistake will be made in Justice League America Annual #9. 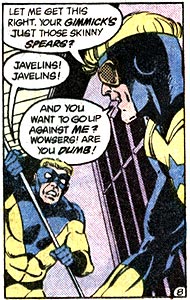 Page 8, panel 9
As the Justice League pairs off against the Suicide Squad, Booster finds himself in combat with Javelin, an old foe of the Green Lantern Hal Jordan who relies on spears. Other than a similarity in costumes, it is a mismatch that does not favor the Javelin. Booster is upbeat during the battle, a contrast to his recent behavior.

Page 20, panel 1
Though they do not appear on panel together, after recovering Nemesis, Booster and the Justice League meet Red Star and the People's Heroes, Hammer, Sickle, and Molotov.

Page 21, panel 9
In a fit of pique over Martian Manhunter's accusations that he is using the League to further a "private vendetta," Batman quits the Justice League, which he calls a "joke," for the second time (previously in Batman and the Outsiders #1). In the wake of Batman's departure, Manhunter, Captain Atom, Gardner, and Booster are shown in mostly quiet contemplation.

Boosterrific Review: Something subversive is happening in this issue: what should be a traditional slugfest between super powered individuals is secretly an exercise in subtle characterization. Curse you, John Ostrander, for turning a fistfight into a team-building exercise! This extra layer of depth makes this issue better than it would appear on first glance.

First of all, this issue is much improved if Justice League International #13 is read first, and nearly incomprehensible if it is not. (In fact, much of what goes on will be more decipherable to those intimately familiar with the DC Universe, though that is not unexpected with the sorts of stories generally found in a Suicide Squad comic, or for that matter stories written by Ostrander.)

Luke McDonnell's art is much more traditional than that of Keith Giffen, artist for the first half of this story in the aforementioned comic book. In this case, his straightforward style is no drawback, as McDonnell's art is perfectly suited to portray the fight that this issue pretends to be, though Bob Lewis' clumsy inking does McDonnell no favors.

(2 votes)
J (Sep. 17, 2014, 16:52:57)
gotta give this top rating, at the time readers of JL and SS were fiending for a showdown between the two teams. The actual throwdown was awesome with the Rick Flagg vs Batman slugfest that absolutely blew my mind with that sick Luke McDonnell artwork. At the time this was truly the Battle of the Century.
KMD (Dec. 28, 2009, 16:34:23)
A better issue-interesting to see how people on both sides gel in the battle.