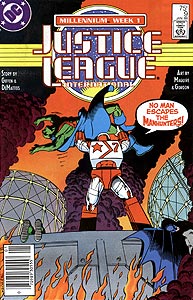 Cover Description: Standing atop a burning oil refinery near a disabled Batman and Guy Gardner, Rocket Red #7 prepares to throw Martian Manhunter into the flames. (No Booster Gold.)

Brief Synopsis: While returning from a meeting with the Oans who plan the Millennium, the JLI is attacked by their sleeper Manhunter agent, potentially triggering an international crisis.

Issue Summary: Flying away from the announcement of the Millennium aboard their new shuttle, the Justice League discover that Rocket Red is really a Manhunter agent. When the team refuses to join his cause, the Manhunter agent attacks Batman, Black Canary, Blue Beetle, and Mister Miracle. Though Guy Gardner, flying alongside with Booster Gold and Martian Manhunter, notices Beetle's cry for help, he ignores it as a joke.

Soon the Manhunter agent takes control of the shuttle, piloting it towards a crash landing in a Bialyan oil refinery. Despite the best effort of the League, they are unable to stop their foe until the Rocket Red Brigade intervenes.

Meanwhile Maxwell Lord ponders the threat posed by the alien Manhunters, unaware that his assistant, Ms. Wootenhoffer, is a sleeper Manhunter agent. Ms. Wootenhoffer shoots Lord multiple times in the chest before she is herself attacked by Lord's security system.

Page 1, panel 1
While returning to their embassy from the meeting with other superheroes in California, Booster, Guy, and Manhunter fly outside the JLI shuttle while the non-flying members remain inside. Why these three chose to remain outside the transport is not explained. Perhaps they are flying as guards. Booster and Manhunter take the opportunity to discuss the Oans' plans.

Page 2, panel 4
Rocket Red #7 reveals that he is a Manhunter. He goes on to explain that the Manhunters only wish to see that the Oans do not interfere with natural development of the human species, but he adds that they are willing to kill anyone who sides with the Oans. A fight ensues when the Justice League stand up to his threat.

Page 9, panel 1
The fight on board the shuttle has gone on for some minutes before Booster and the other flying guards notice and move to intercede. Booster is the first to realize that the shuttle has been redirected towards an oil refinery inside the Middle Eastern country of Bialya.

Page 13, panel 5
The Manhunter robot, a metal skeleton devoid of armor and skin, rises from the remains of a burnt-out ruin in much the same manner as the title character in the 1984 movie The Terminator. 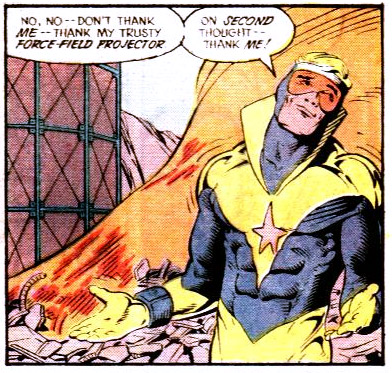 Page 16, panel 2
Maxwell Lord is revealed to know Superman's secret identity as Clark Kent, one of the most closely guarded secrets in the DC Universe.

Page 16, panel 7
SPOILER WARNING!: First on-panel appearance of Lord's secretary, Ms. Wootenhoofer. It turns out that she is a Manhunter. She will shoot Lord twice in the chest before she is herself assaulted by Lord's advanced computer which has more in common with Ms. Wootenhoofer than it would appear. Reveal

Page 17, panel 10
The door to Lord's office identifies him as Maxwell Lord IV. Lord never speaks of his past, so the previous Maxwell Lords remain unknown.

Boosterrific Review: This comic is everything that should be expected in a Justice League comic, and well more than could be reasonably expected in a company-wide crossover issue. The writing and art teams fire on all cylinders with this issue that is fantastic even for those Justice League fans unfamiliar with the crossover Millennium storyline. Well done.