Love the Ones You're With

Not so long ago, someone asked me if I could make a list of the best Booster Gold stories that weren't in Booster Gold or Justice League series. That was on my mind as I was compiling the Boosterrific list of "featured" stories I mentioned in Monday's post. The answer is: it's a short list.

Almost every other great Booster Gold story takes place in his self-titled series or alongside his Justice League super friends. Which, let me emphasize, is not a bad thing.

My favorite Booster Gold comic is his first featured JLI appearance, Justice League #4. I always get a kick out of his misadventures on KooeyKooeyKooey with Blue Beetle in Justice League America #34 and as the field general of the Conglomerate in Justice League Quarterly #1. And what Booster booster doesn't love the work creator Dan Jurgens has done filling Michael Jon Carter's life with supporting characters like as Broderick, as seen in Booster Gold Volume 1, #18?

If you're looking for the best Booster Gold adventures outside the usual places, read the books I listed above. They're good, I promise. But please remember to enjoy Booster Gold wherever you find him. He rarely disappoints. 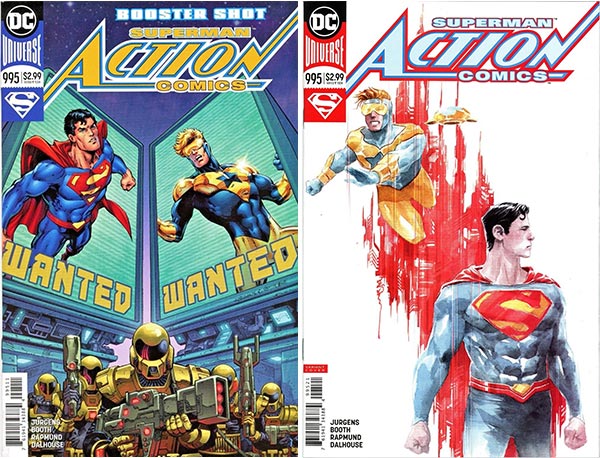 Though interior art is provided by Brett Booth and Norm Rapmund (and not Dan Jurgens), Jurgens did draw one of the two covers. The other cover is credited to Jay Leisten and Neil Edwards.

UPDATE: dccomics.com got their own credits wrong again (for the third issue in a row). The alternate cover is by Dustin Nguyen.

Newsarma.com has the preview. (Spoiler warning: It contains the return of an old Booster Gold foe whose name rhymes with Roderick!)

Give Broderick Some Love

Have you been listening to the Silver and Gold podcast? The latest installment covers Booster Gold, volume 1, #18 from 1987.

To get it out of the way, guys, yes this issue is the last appearance of Broderick. And Booster Gold volume 1 should not be considered an "epic failure." Though it may not seem like much, twenty-five issues featuring a brand new character isn't so bad, even in the mid-80s. 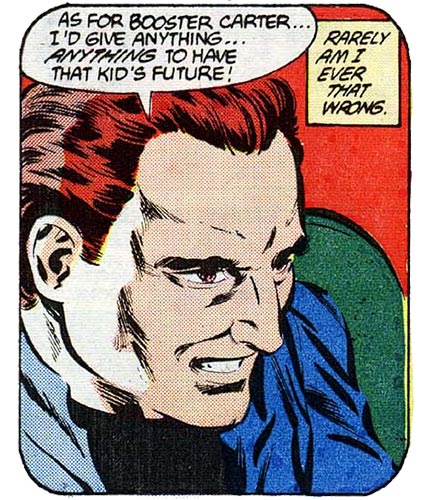 That Broderick is never mentioned again is, in fact, my only complaint about this issue. He was much too good a character to appear in the spotlight only once. As I covered in my "The True Story of Booster Gold" series in 2015, Dan Jurgens had intended for Broderick to return. However, like Trixie and Dirk Davis, Broderick became just another casualty when Booster Gold volume 1 was cancelled going into Millennium.

Despite Roy and FKAjason's podcast snark, Booster Gold #18 is a good comic. Not only do we see Michael "Booster Gold" Carter lay his life on the line to behave like a hero when the cameras are off, we get to see it through the eyes of a skeptic. We're also treated to more of Booster's backstory. Great character- and world-building all in one comic! What more could you want?

*somewhere at DC HQ, a finger curls on a monkey paw*

*next up: DC announces a new title starring Broderick, and never a Booster Gold comic ever again*