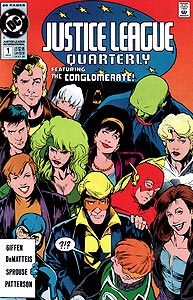 Issue Notes: This issue was promoted via house ads that include Booster Gold.

Page 6, panel 1
FIRST APPEARANCE: First appearance of the superhero team, the Conglomerate. Members include the aforementioned Booster Gold, Praxis, Gypsy, Echo, Vapor, Maxi-Man, and Reverb. Both team leader Booster Gold and Gypsy are former members of the Justice League. Reverb is the younger brother of deceased Justice League member Vibe. Maxi-Man made his debut by challenging Justice League member Mister Miracle. Praxis debuted in the titular book of Justice Society member the Spectre (Spectre, Vol. 2, #24). This is the first appearance of Echo and Vapor. This is Booster's first opportunity to play the role of team leader, a position that, as an ex-quarterback, suits him well.

Page 7, panel 1
FASHION ALERT: The assembled group models the Conglomerate's official "costume," a black leather jacket with the team logo over the right breast and sponsorship logos on the back.

Page 11, panel 1
The first meeting between the Justice League (Blue Beetle, Fire, Guy Gardner, and Ice) and the Conglomerate results in a successful mission accomplished for the Conglomerate as they prevent "Phil" from killing Mr. Whiteman, the head of Dupree Chemical. Booster doesn't hesitate to rub the Justice League's nose in his newfound respect and responsibility. Needless to say, the two teams do not get along from the start. 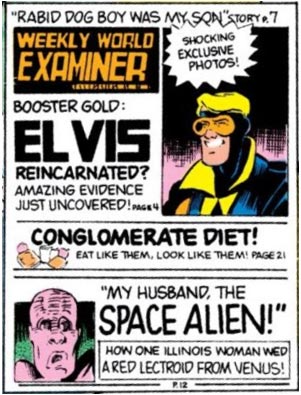 Page 15, panel 1
MEET THE PRESS: A television in the New York Embassy of the Justice League announces that Booster Gold, identified as the "Conglomerate Boss," will be appearing in an interview on the show Geraldo. Geraldo was the syndicated daytime talk show of reporter Geraldo Rivera.

Page 22, panel 1
In Booster's New York Conglomerate office, Booster and Blue Beetle get into an argument about Booster's choice to leave the Justice League and become the leader of a corporate-sponsored superhero team. This continues a recent trend of bad blood and bruised feelings between the two former best friends.

Page 24, panel 2
Booster and the other male members of the Conglomerate hide from a shareholders' meeting in the men's restroom. All four lament the necessity of such meetings. Booster comments that he had more fun on The Joe Franklin Show, a long-running television talk show devoted to the celebration of celebrity nostalgia.

Page 25, panel 2
MEET THE PRESS: Claire reveals that Booster has performed "Stupid Superhero Tricks" on Late Night with David Letterman. David Letterman, host of NBC's Late Night from 1982 to 1993, had guests whose pets perform unusual or silly tricks on his show during an act called "Stupid Pet Tricks." 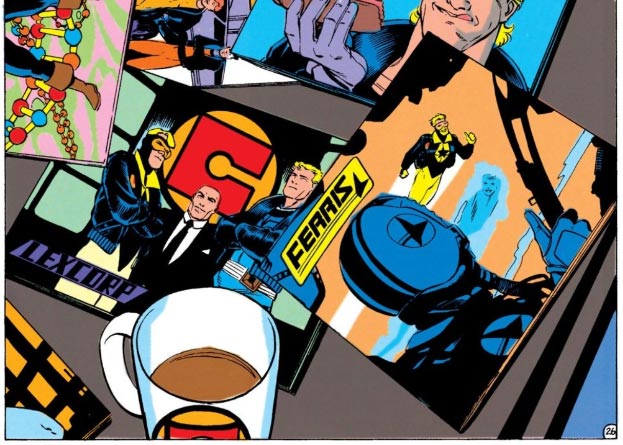 Page 26, panel 1
PRODUCT PLACEMENT: Booster is shown on advertisements for Conglomerate sponsors Dupree Chemical, Ferris Aircraft, and Lexcorp. It is particularly surprising that Booster would appear in a Lexcorp advertisement, since Luthor has in the past tried to both slander and kill Booster Gold as well as run Booster's Booster Gold International into financial ruin. No doubt Luthor relished the opportunity to humiliate Booster by forcing him to appear in the advertisement. At least Booster isn't smiling.

Page 29, panel 1
At the urging of their corporate sponsors, the Conglomerate is attacking the government of the Central American country of San Sebor (assisting local pro-democracy "freedom fighters") when Maxi-Man mentions the General Glory comic books. This is the first mention of General Glory, who will soon join the Justice League. 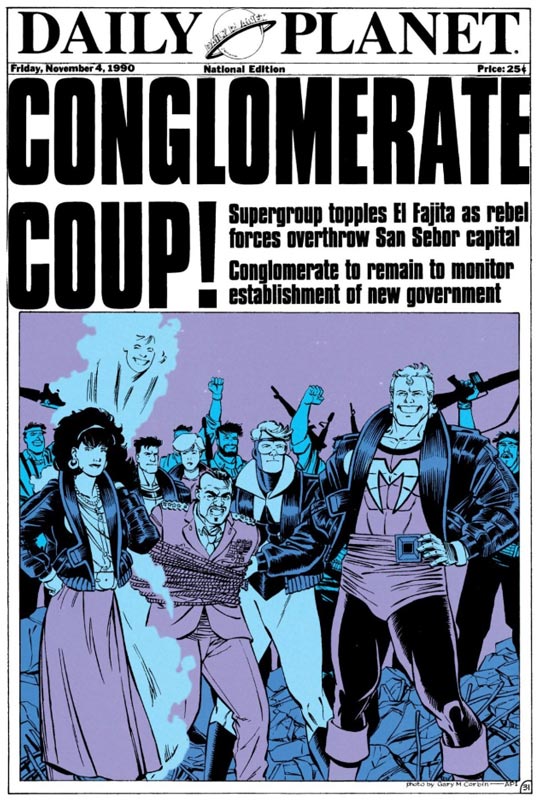 Page 34, panel 1
POWER UP: Booster discusses the San Sebor situation with the leader of the rebels. Booster is apparently speaking a foreign language, possibly Spanish, as the rebel leader, El Carbonero, does not appear to understand English. This is the first indication that Booster is fluent in a language other than English. It is not clear whether this is a skill that Booster learned as a youth in the 25th century, language he learned since traveling to the 20th century, or the use of the Universal Translator in his Legion Flight Ring.

Page 36, panel 2
The Conglomerate is literally surrounded by the Justice League (Martian Manhunter, Flash, Power Girl, Fire, and Ice) who have come to arrest the Conglomerate on behalf of the United Nations for the Conglomerate's actions in San Sebor. Booster believes that the League has simply come to rain on the parade of the successful Conglomerate.

Page 46, panel 4
MEET THE PRESS: Booster takes the opportunity during a live GBS news broadcast by Quentin Fairacre to chastise Conglomerate sponsor, Ovel Oil, for their role in an oil spill.

Page 57, panel 1
In an attempt to patch up their relationship, Booster admits to Beetle that Beetle is his best friend "in any century."

Page 58, panel 3
Booster and Martian Manhunter confront one another as equals: two respectful team leaders working together. This is quite a change in dynamic from the pair's confrontation in Justice League America #37.

Page 65, panel 2
Though Booster may be too busy fighting Ernie, Phil's brother, to notice, Hector Hammond has entered the battlefield. Hammond is a longtime Green Lantern foe, debuting in Green Lantern, Vol. 2, #5 in 1961

Page 71, panel 1
EXTRA, EXTRA: Again, the Conglomerate makes the headline of the Daily Planet, this time on Friday, November 9, 1990. This time the Planet gets it right, as November 9, 1990 was indeed a Friday.

Page 72, panel 7
On Booster's desk is a Justice League Signal Device. This indicates that despite Booster's previous resignation from the Justice League, he remains a reserve member. Dialogue in the panel would indicate that Booster and Claire Montgomery are developing a romantic relationship.

Boosterrific Review: If this story is not exactly what you appreciate in comic books, you have probably come to the wrong website. Without a doubt, this is one of the best Booster Gold stories ever written. Booster finds himself in the unfamiliar -- and arguably unearned -- role as team leader for the fledgling Conglomerate, a super team financed by multi-national conglomerates. This situation provides the ultimate opportunity for writers Giffen and DeMatteis to explore the relationship between well-intentioned individuals who are constrained by political or economic masters who do not necessarily share their ideals or goals, an ideological debate often spotlighted in the regular Justice League titles. Booster Gold is equal parts smart, heroic, selfish, and arrogant in this none-too-subtle tale of questionable heroism and petty jealousy that is as piercing a commentary on American culture and politics today as when it was written. It's a natural fit for the Corporate Crusader. A must read comic book with great art, great story, great everything.