“To Cross the Rubicon”

Cover Description: Photographs of Booster Gold and Skeets lie on a table along a photo of Rip Hunter's Time-Sphere, Booster's glove and Legion Flight ring.

Brief Synopsis: The arrival of an alien in Metropolis leads to the revelation of Booster Gold's origin.

In order to attract Superman, Booster issues a press release challenging the Man of Steel to meet him at Baker Dam. Superman arrives, but is dismissive of Booster Gold. Skeets tells Superman Booster's origin story to sway Superman to help.

Michael Jon "Booster" Carter was the greatest football player of the 25th century before he began gambling on his own games. The resulting scandal ruined his potential career. Finding work as a security guard in the Space Museum, Booster hatched the idea to steal Skeets, a security robot, and select exhibits and travel into the past to redeem himself as a hero.

Rather than encouraging Superman to work with Booster Gold, this has the opposite effect. Superman and Booster get into a shouting match defending their opposing philosophies. The argument is interrupted by Ranzee, who warns of approaching aliens. Before the heroes can react, they are incapacitated and captured by aliens.

Issue Notes: Note that this cover details Booster's height as 6'-5" and weight as 220-lbs. Those statistics would mark Booster as slightly overweight by modern Body Mass Index (BMI) computations.

Story Notes: The issue title is a reference to the Rubicon River that Julius Caesar crossed with his army to initiate the Roman civil war. This metaphor has come to mean "passing a point of no return." In this particular issue, it refers to Booster's decision to flee from the future to the present, as time travel is an irreversible act at this point in the history of the DC Universe.

Page 2, panel 1
Who's that crossing the bridge in the panel background? Why, it's none other than Marvel Comic's God of Thunder, Thor! Dan Jurgens would eventually go on to write Thor for 79 issues starting in 1998. (Spotted by Ariel Justel.)

Page 4, panel 8
PRODUCT PLACEMENT: Booster again advertises Flakies in a television ad. In front of the television is a 12 ounce can of "Coke." The can is the pre-"New Coke" traditional design, lacking either the "Classic" or "New" tag on the can above the word "Coke." New Coke was introduced in April 1985, a year before this issue hit stands.

Page 5, panel 1
BOOSTERRIFIC! COUNT: 3. This time Booster's catchphrase is broadcast through a television set playing the Flakies commercial recorded in Booster Gold, Vol. 1, #2. Since this is a recording, it should appear as it previously did, and it is: "Boosterrific!"

Page 5, panel 4
On the telephone, Trixie tells the "Governor" that Booster is too busy to speak with him. Metropolis is located in the state of New York, and the Governor of New York in 1985 was Mario Cuomo, who held the position for more than a decade.

Page 6, panel 1
Narrative balloon describes the setting as a "cool, crisp April day," presumably in 1986. This places this story approximately five months after the events of Booster Gold, Vol. 1, #5. Booster is shown relaxing in his "private rooftop, complete with a relaxing jacuzzi."

Page 6, panel 3
Booster wants, but does not own, a large screen TV and a private helicopter. Booster's desire for a large screen television set will continue for years, carrying over into his days with the Justice League International.

Page 6, panel 6
SILVER SCREEN: Dirk tells Booster that the rough script is complete for his movie.

Page 7, panel 1
Booster and Skeets meet Jason Redfern and Z in Booster's "main computer and crimebusting HQ," actually a set built to impress the media at press conferences. It would seem that the offices of Goldstar, Inc. are comprised of three rooms: lobby, Dirk's office, and this set.

Page 8, panel 4
In order to draw Superman into a face-to-face meeting, Booster Gold issues a press release daring Superman to meet him at Baker Dam. Booster is using this situation to meet Superman, a longtime idol of his. This suggests that Booster's choice of Metropolis as his base of operations was more than mere happenstance. 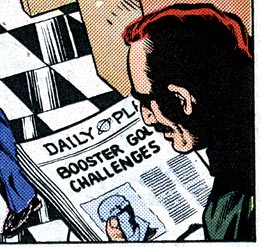 Page 9, panel 3
EXTRA, EXTRA: Appearance of Clark Kent in the Daily Planet building. Booster appears on the cover of the Daily Planet under the partially visible headline "Booster Gold Challenges."

Page 10, panel 3
HIS STORY: For the first time, Booster is shown to clearly have knowledge of events that will occur "500 years from now." Any lingering doubt about Booster's origin as a time-traveler can be dismissed.

Page 11, panel 1
Superman and Booster Gold appear on panel together for the first time. Not only is this the first appearance of Superman in an issue of Booster Gold, or Booster's first interaction with another DC Universe Justice Leaguer; this is the very first chronological post-Crisis on Infinite Earths appearance of Superman as his own titles were on hiatus pending John Byrne's relaunch of the character in the modern DC Universe.

Page 12, panel 4
Superman reveals that 1.) he doesn't like Booster Gold's style, and 2.) Booster's powers are mostly mechanical in nature, "obviously the product of a superior technology." Superman does not recognize Booster's Legion Flight Ring because in the newly established post-Crisis on Infinite Earths DC Universe continuity, Superboy never existed and therefore Superman has never met the Legion of Super-Heroes. This book was published one-month prior to John Byrne's' The Man Of Steel #1.

Page 12, panel 7
Superman deduces that Booster and Skeets are from the future, proving that even post-Crisis Superman has a Super-brain. (Though Superman does say that the deduction "doesn't take a genius." He's got all the brains and the brawn, and he's still modest.)

Page 13, panel 1
HIS STORY: After Booster Gold has walked away, Skeets reveals to Superman that he and Booster are from the year 2462, 476 years into the future.

Page 13, panel 2
HIS STORY: Booster Gold's real name is Michael Jon Carter, and he was an All-American quarterback for Gotham University, where he wore the number 13. The Gotham University uniform is solid red with white accents and numbers. Booster earned the nickname Booster from playing football, where the term "booster" often refers to a team supporter.

Page 14, panel 2
HIS STORY: Booster is revealed to have gambled on football games, including games he played in. For this error in judgment, Booster was expelled from school as a 20-year-old sophomore and ostracized from society. (By comparison, this is the same action for which baseball's Pete "Charlie Hustle" Rose was ostracized from the sport and prohibited from the Professional Baseball Hall of Fame despite being the all-time leader in hits and games played.)

Page 15, panel 2
HIS STORY: This is the first time that any information about Booster's relatives has been revealed. Booster and his twin sister, Michelle, were born poor. Booster's father was a compulsive gambler, and he abandoned the family when Booster was 4 years old.

Page 16, panel 3
HIS STORY: After leaving Gotham City, Booster got a job as a night watchman in Metropolis' Space Museum (as featured periodically in DC's science-fiction anthology comic Strange Adventures from issue #104 in 1959 through issue #161 in 1964). Skeets reveals that he worked with Booster at the Space Museum as a security robot, or a "watch dog." Booster works at the museum as he takes courses at Metropolis University, "specializing in Super-Heroes of the Twentieth Century." It is unclear if he graduates from his second university, though he is shown to specifically study Batman.

Page 19, panel 1
POWER UP: Booster steals the devices that he will turn into his costume: Alien gloves and control bands for energy rays, energy rods to power the costume, Brainiac 5-designed flight ring and force-field belt, a power suit with microcircuit weave for augmented strength, and a 20th-century Visa card.

Page 20, panel 1
Superman rather succinctly describes Booster as "a 25th century crook." (In 20th century slang, "Booster" can also be a synonym for a thief.) Skeets confirms that the "present day" year in which this story takes place is 1986.

Page 21, panel 2
Superman recognizes the basis for the language that Skeets couldn't earlier decipher. Again Superman demonstrates that his knowledge and experience far outstretches the norm, even by year 2462 standards.

Page 22, panel 1
Booster, Jason, Superman, and Z are disabled by a blast of arcane magic that does not affect Skeets. Superman's post-Crisis vulnerability to magic will be used often to add an element of danger to his otherwise invulnerable immortality.

Boosterrific Review: The Booster Gold origin issue finally answers all of our major questions about DC’s first post-Crisis on Infinite Earths character. And it turns out he's something of a dirtbag.

Wrapped inside the frame story of an interplanetary alien seeking out Superman is Skeets' revelation of Booster's origin story to Superman. Considering the ties Booster's intended origin has to Superman's history (see Secret Origins, Vol. 2, #32 for details), it is only fitting that it be Superman who first learns Booster's story. It is also fitting that Superman condemns him for it. This origin story has none of the cliched "the doctor says momma needs an operation" excuses that will appear in Booster's version of events (revealed later), perhaps because an impartial Skeets is inclined to tell the unvarnished truth. As a result, Skeets depicts Booster as a Shakespearean tragic hero subject to the cardinal flaw of pride, a sin that, while not fatal (yet), will cause Booster suffering well into the future.

The origin revelation and the interplay between Booster Gold and Superman steal this issue, and make it an instant classic. The frame story fares less well, as it is clearly little more than a vehicle to put the stars of the issue together and contrast their personalities. But as usual, Dan Jurgens manages to sprinkle even his mundane plots with enough enjoyable touches (Micronauts-like aliens, interplay with the supporting cast, the introduction to Booster's press room) to make them enjoyable, even on repeat readings.

(2 votes)
BoosterPowershot (Oct. 5, 2010, 00:44:30)
Excellent origin story and issue in general, despite Superman's rather constant stream of annoying putdowns. While I do like Booster's story, I liked it even better with the cliche additions later on- it made the character even more sympathetic, and while cliches are considered tactless, they are cliches for a reason.
KMD (Nov. 11, 2009, 14:28:54)
Great issue. Great origin, great story, great reaction with the caped boyscout and Skeets really starts to come into his own here.