Brief Synopsis: The heroes and citizens of the DC Universe attempt to get on with their lives in the uncertain aftermath of Infinite Crisis.

Issue Notes: The series 52 is a 52-issue limited series published one issue per week for 52 consecutive weeks. Its original purpose was to explain the events that bridge the gap between the conclusion of the Infinite Crisis mini-series and the "One Year Later" storyline in all DC Universe comic books published after Infinite Crisis concluded. Booster's role in this story is a major one.

Page 1, panel 1
As the fragments of the near-infinite number of Earths that were destroyed in during Infinite Crisis recombine to form New Earth, Booster Gold can be seen in his familiar Mark I costume among the depicted heroes, villains, and significant events shown on the circling pieces of the fractured reality. Though the significance of this is undetermined, it hints that Booster's origins and history have been integrated into the fabric of New Earth.

Page 5, panel 4
"Week 1, Day 5." In the city of Metropolis, a street scene includes a Fleischer Bros. bus (named for the production studio that made cartoons of Superman in the 1940s), a "Hot DiDiDogs" stand (named for DC Executive Editor Dan DiDio), and street signs for Siegel and Shuster Streets (named for the creators of Superman). The scene is interrupted by the familiar cry of, "Look! Up in the Sky!" The phrase is usually heard during Superman sightings, but this time...

Page 6, panel 1
...the cry is raised by Skeets II reintroducing Booster Gold to the masses of Metropolis. Booster began his career in Metropolis in Booster Gold #1, though he eventually left the city for a new start away from the "competition" of Superman. Booster hoists above his head the villain Mammoth, a member of the Fearsome Five and a frequent foe of the Teen Titans.

Page 7, panel 1
FASHION ALERT: Booster's costume has changed slightly since last seen in Infinite Crisis. Though he still has gold stripes on his arms, he now wears blue gloves.

Page 8, panel 2
PRODUCT PLACEMENT: During an improvised photo-op over a prone Mammoth, Booster takes the opportunity to promote Soder-Cola, the premier soft drink of the DC Universe. Notably, according to the Checkmate database seen in Countdown to Infinite Crisis #1, Booster's sponsorship contract to Soder-Cola had previously been terminated. Apparently, Booster's recent heroics made him once again valuable to the Soder-Cola company.

Page 9, panel 4
MEET THE PRESS: Booster produces a tear in response to a reporter's question about the death of Superboy III during Infinite Crisis. Booster and Superboy had crossed paths on several occasions, but the two heroes never worked closely together or fought on the same team. Both heroes had a respectful rivalry with Superman and each had a well-earned reputation as an extroverted publicity hound.

Page 10, panel 5
HIS STORY: Skeets informs Booster "that there's a shipyard disaster across town that you're due to stop." This information implies that since returning from the future, Booster and Skeets have been embarking on a campaign to perform the heroics that future history designates Booster Gold performed in the past. This situation illustrates the continuing time paradox that Booster Gold represents: Booster had to return to the past in order to stop this crime so that it could become a part of his previous history. Booster has never shown any interest in these sorts of paradoxes that his existence seems to create. 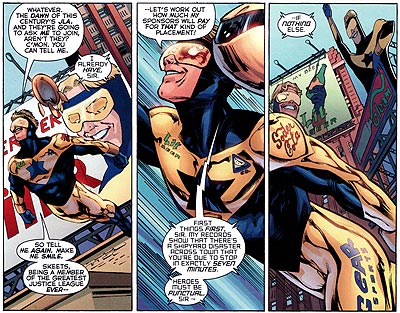 Page 10, panel 6
PRODUCT PLACEMENT: For the second time in three panels, Booster flies past billboards with his face on them. In addition to Soder-Cola, Booster also promotes several other products, including Banana Co., Booster Gear Sports, Gleam Toothpaste, and Lit Beer. Some products are highlighted by means of patches on his costume, much like a professional athlete. Many of Booster's sponsorships must have been earned as a result of Booster's integral participation with the assault against the Brother Eye satellite during the recent Infinite Crisis.

Page 20, panel 2
After Booster makes a fool of himself, Firehawk openly insults him. Is that any way for her to treat her former partner? (See Chase #4 for more details.)

Page 21, panel 5
HIS STORY: When Batman, Superman, and Wonder Woman do not arrive to announce the reformation of the Justice League and Skeets malfunctions, Booster panics, realizing that events are not happening in the order recorded by his future history. It has been previously demonstrated that when Booster's timeline is changed by means other than Booster's own actions, he is unaware of the changes. Skeet's sudden crash and Booster's recognition of a failure of history indicates that time has been manipulated by outside forces, though it is unclear if the changes are a result of the formation of the New Earth at the conclusion of the Infinite Crisis or some other calamity.

Page 21, panel 6
In his paroxysms, Booster accidentally elbows Clark Kent in the nose, drawing blood. Despite all of Booster's (potentially erroneous) knowledge of the future, he either is unaware that Clark Kent is the secret alter ego of Superman or is a very credible actor.

Boosterrific Review: In recent years Booster Gold has been reduced a laughingstock, a punch line, a shadow of the hero he once was. But 52 restores our hero to levels of success and popularity not seen since he was leader of the Conglomerate.

This series was intended to depict a year in the life of the DC Universe without its "Big Three," Batman, Superman, and Wonder Woman. Lucky for us, this opens the door for stories about some of the DCU role-players, characters often overlooked in the universe-spanning sagas of the aforementioned major heroes. 52 is essentially an anthology of stories that interweave and unravel in real time (well, as "real time" as comic books can manage, anyway). This leaves a lot of time for subtle characterization, the cornerstone of every great story. Booster Gold is one of the lucky ones with a chance for a return to the spotlight, and he makes the most of the opportunity when he gets it. It helps that the series is written by some of the most revered names in contemporary comic books. Never before have the likes of Geoff Johns, Grant Morrison, or Greg Rucka had a shot at Booster Gold, and the result is pure gold.

In this first issue, Booster falls back on some old habits, including shallow boasting, selling out, acting the fool, etc., but this is more shorthand establishment of the character as a launch pad for future events than a revision of recent history. In this opening chapter Booster is at his boisterous, snarky, and driven best. And Booster is just one portion of this story. If the rest of the issues of 52 read as well as this first issue, it will be a story for the ages.