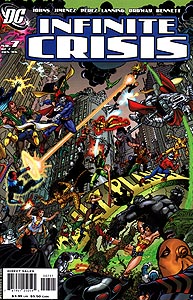 Cover Description: Each issue of Infinite Crisis has multiple covers. One of this issue's covers features Superboy and the Green Lantern Corps while the other shows combat between a large number of DC Universe heroes and villains. (Neither cover features Booster Gold.)

Brief Synopsis: The final battle between Superboy and the heroes of Earth.

Issue Notes: This mini-series is essentially a direct sequel to the Crisis on Infinite Earths miniseries published 21 years earlier in 1985. In this issue, Booster Gold plays a minor role, appearing among other DC Universe heroes. 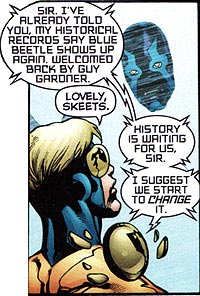 Page 29, panel 3
Though Skeets tells Booster that Blue Beetle III will be fine, Booster seems uncertain. It is unclear why Booster remains so concerned about the third Blue Beetle. Presumably, Booster harbors some lingering guilt about his inability to aid Beetle's predecessor. Skeets suggests that he and Booster "start to change" history. The significance of this statement is left to the reader's imagination, since it is impossible to know what aspects of history Booster would seek to change.

Page 34, panel 1
Booster (and Skeets!) appears in a symbolic two-page spread among many of the heroes who survived Infinite Crisis and will play a role in the future of the DC Universe. (Note that this Joe Bennett image is replaced by George Perez artwork in future reprint editions.) 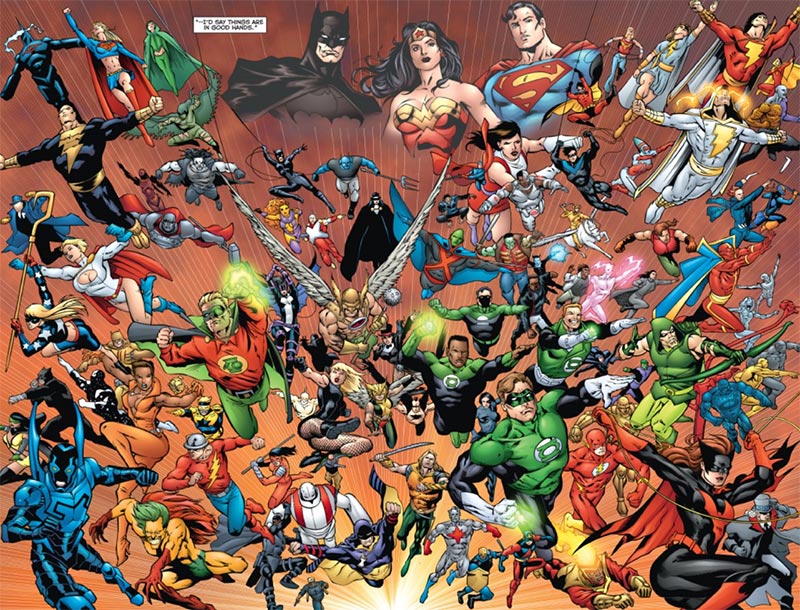 Boosterrific Review: If for nothing else, Geoff Johns' reputation among the premier comic book authors has been secured with this fantastic series that has been equal parts characterization, drama, action, and history. This issue is of course no exception. As hard as it may have been to successfully resolve the ever-increasing tension of the building storyline, Johns succeeds with aplomb in crafting a story to equal or exceed the original Crisis on Infinite Earths. Congratulations to all involved.