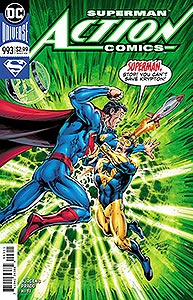 Cover Description: This book has two covers, one drawn by Dan Jurgens and the other by Francis Manapul. Each features Superman and Booster Gold.

Brief Synopsis: Booster Gold travels through time to prevent Superman from accidentally changing the past.

Issue Notes: This issue was released the second week of DC's new "DC Universe" trade dress and has no cover date.

Page 1, panel 1
Picking up where the previous issue left off, Booster Gold and Skeets have arrived in the orbiting Justice League Watchtower too late to prevent Superman from departing on a trip through time with the Flash's Cosmic Treadmill.

Page 2, panel 6
Flash takes offense to Booster snooping around his Cosmic Treadmill, calling Booster a "neophyte." Booster Gold has only appeared in 36 issues taking place in the DC "New 52" Universe in the past 6 years (since Flashpoint). It's kind of hard for any hero to establish a track record when he never gets any screen time.

Page 10, panel 2
POWER UP: Skeets defeats the Flash using the Watchtower's own defense mechanisms, reminding Booster (and the reader) that it is "the product of 25th century technology." As Arthur C. Clarke famously said, "Any sufficiently advanced technology is indistinguishable from magic." Skeets is a wizard!

Page 11, panel 5
"Several risque Tumblrs...." Is this an in-continuity reference to "Boostle," works of fan art focusing on a romantic relationship between Booster Gold and Blue Beetle? 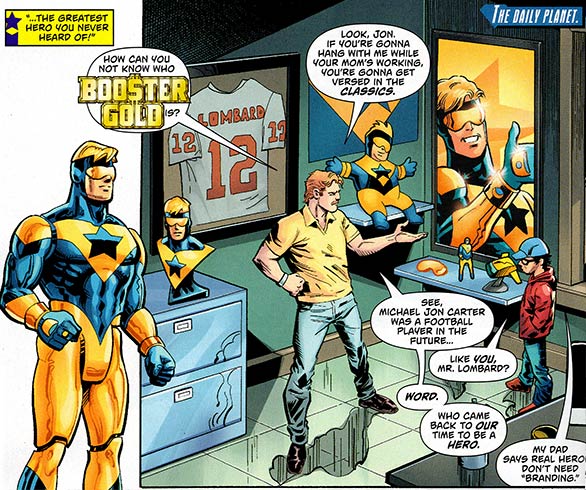 Page 12, panel 5
Brash and self-centered, Lombard has been the anti-Clark Kent among Daily Planet employees since his first appearance in 1973. If Lombard brags about being Booster's "Number One Fan" around the office it's only natural that Booster would be unpopular with the rest of the Planet staff, including Clark Kent, Lois Lane, and their son, Jon.

Page 13, panel 1
Lombard claims to have a Booster Gold-autographed "Gold Nuggets jockstrap." Metropolis has never had a "Nuggets" sports team, so this is presumably a piece of athletic equipment from the Denver Nuggets, whose team colors are blue and gold.

Page 16, panel 4
POWER DOWN: To start this issue, Booster and Skeets arrived too late to stop Superman. Now they fall victim to an unexplained time vortex. Hmm. Perhaps calling them "Time Masters" is a bit of an overstatement.

Boosterrific Review: This story calls back to the first interstellar adventure between Booster Gold and Superman in Booster Gold, Volume 1, #6 (also written and drawn by Dan Jurgens). In that case, Booster was the one making rash decisions, and Superman was the experienced mentor. Now the roles have been reversed. It makes a good start for a multi-issue story arc.