Booster booster Blot added another key commission to his Booster Gold sketchbook in 2019, but I'll let him explain in his Twitter post: 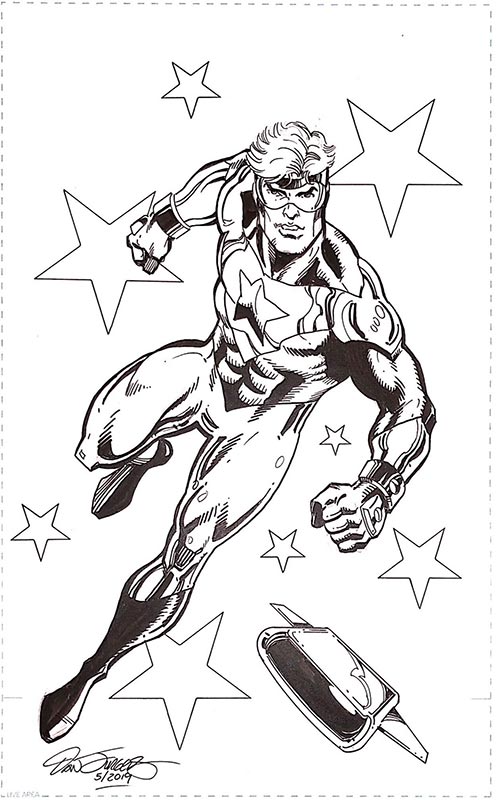 May everyone have as fortunate a 2020.

Going Back to Cort

Booster booster Cort harvested a bumper crop of commission Booster Gold this season. Check them out!

Boosterrific as always, Cort. Thanks for sharing.

Cort posted on Oct. 16, 2019 at 9:35 PM
Thanks! Always happy to share with some Booster boosting. (The Giffen piece in particular, I'm surprised I haven't really seen any others. My friend just happened to bump into his agent at a con and the agent offered commissions since he wasn't there to sign. So I definitely wanted to share that along, as one of Boosters biggest writers alongside Jurgens.)

I'm excited to see what next year will bring. Probably won't get as many as I did this year, but I'll definitely try to have some great pieces to share. 22 total so far! My Booster commission book is coming along.

Boosterrific [Official Comment] posted on Oct. 16, 2019 at 10:10 PM
The Giffen is my favorite. I've always been attracted to his art, perhaps because it is so atypical of DC's usual productions.

Friday afternoon, The Hollywood Reporter broke the news that DC finally plans to release their comprehensive Rebirth continuity in 2020. That's a mere 9 years after they threw out decades of character development in a bid to boost sales.

"We're starting to figure out how continuity works," [DC Comics co-publisher Dan] DiDio said about the process, noting that reboots and complicated retcons are what happens when "things stop making sense."

I'm glad that DiDio, who has overseen DC Comics' output since 2004, has finally realized the value of continuity to the types of stories that his company sells. Better late than never, I guess.

Anyway, I'm sure that what you want to know, as a visitor to a Booster Gold fan site, is "how will this affect Booster Gold?" The answer looks to be: Pretty significantly.

DiDio made the announcement at the "DC Nation" panel of this past weekend's New York Comic Convention accompanied with an illustrated graphic. Bleeding Cool spent most of the weekend pouring over the visible bits of that timeline. I can't make out anything, but Rich Johnston seems to think it restores most of the post-Crisis on Infinite Earths continuity as the third generation of DC heroes.

If that is to be believed, it looks like Booster Gold's history once again includes his joining the original "Bwah-ha-ha" Justice League International alongside Blue Beetle. Also restored: Infinite Crisis and Justice League: Generation Lost. Is there time for 52 to have happened in there somewhere? One can only hope.

Will any of this ever make it to print? Will the short-lived New 52 continuity be abandoned? How can Convergence be shoehorned into this new chronology? Who knows. Maybe we'll find out after Doomsday Clock finally ticks down in December.

Cort posted on Oct. 7, 2019 at 3:41 PM
It was pretty exciting to see how much recognition Booster Gold had on the timeline, especially around G4. With him being noted as recalling the past continuity being canon still too. Heres hoping to a future series with him!

Boosterrific [Official Comment] posted on Oct. 7, 2019 at 5:12 PM
Not having a timeline at the launch of the New 52 was a colossal blunder, and I'm glad DC is finally correcting that mistake.

From Rags To Riches

Booster booster Steven Palchinski caught up with Rags Morales at a recent convention and commissioned this Boosterrific portrait:

That's worth hanging in the living room!

Thanks for sharing, Steven.

Steven Palchinski posted on Sep. 24, 2019 at 11:53 AM
You are very welcome and Thank you for the share!
Also, if you ever have a chance to meet Rags, he is a awesome guy. Just before I ordered the sketch, he was doing a portfolio review and gave pointers to a 14yo girl. He did a really good job.