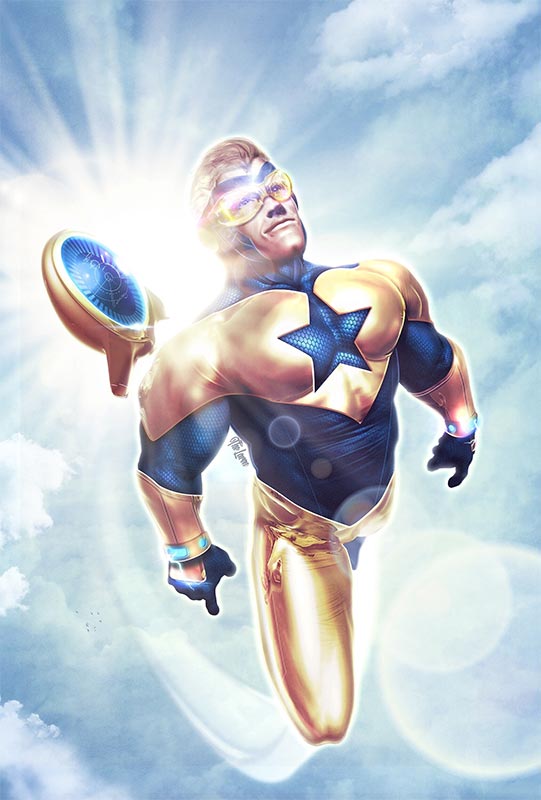 DC released solicitations for June last week, and I'm sorry to say that the only Booster Gold appearance looks to be in the Injustice 2 Volume 6 hardcover collection reprinting Injustice 2 issues 31 through 36. We'll have to hope that Booster is just taking a well earned vacation after the conclusion to Heroes in Crisis and isn't being incarcerated for murder.

It remains possible that Booster will be seen in Brian Michael Bendis' Event Leviathan. Solicitation text describes it as "a mystery thriller that stretches across the DC Universe and touches every character from Batman to Superman to the Question to Talia al Ghul." That's not much to go on, but no one can deny that Booster Gold is certainly a character.

Speaking of Booster ensemble appearances, longtime Booster booster Morgenstern thinks he has spotted our hero in another recent issue of Superman written by Bendis. See this title page from Superman #9: 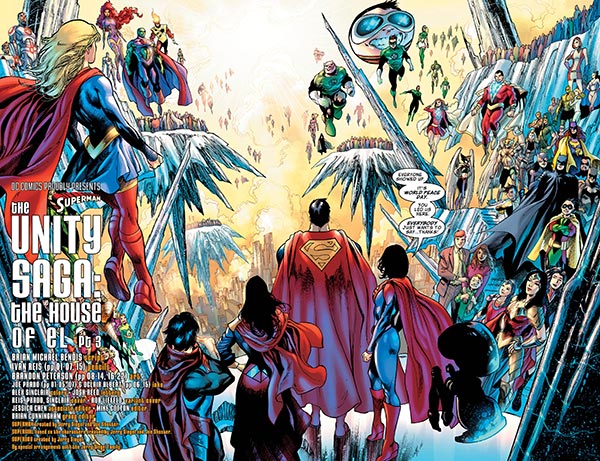 That's a pretty crowded picture. Here, let me zoom in.

Spot him yet? No? Let's get closer still.

Says Morgenstern: "On the Lower left, hidden by the word "HOUSE", next to Ted Kord, is someone who might be Booster Gold."

Is it? Could be. Maybe. I think we can all agree on one thing: Morgenstern has some great eyes!

Thanks, M. Maybe if you take a look at the rest of those DC Comics solicitations at Newsarama.com you'll have better luck spotting Gold than I did.

Jesster posted on Mar. 20, 2019 at 4:23 PM
Animal Man, definitely Animal Man. I believe Zatanna has a restraining order against Booster.

DC Comics' March 2019 solicitations for Heroes in Crisis #7, released yesterday, may include a bit of a spoiler, so read at your own risk.

HEROES IN CRISIS #7
written by TOM KING
art and cover by CLAY MANN
variant cover by RYAN SOOK
The Trinity may have uncovered the true killer responsible for the deaths at Sanctuary, but the artificial intelligence that ran the institution is the one thing standing between them and the culprit. Now Batman, Superman and Wonder Woman must face off with their own creation—and face the consequences for what they created. Also, as the truth is uncovered, Booster and Harley go from being enemies to allies. Click here to reveal potential spoilers
ON SALE March 27 · $3.99

It seems to me that we've been getting a lot of spoiler-y details about this series recently. We got our first glimpse at the controversial cover for this issue last week, and even writer Tom King objected to the way it appears to identify the killer (and sexualize a corpse). Now comes this solicitation, which barely avoids explicitly clearing someone of suspicion of the murders.

Heroes in Crisis is a nine issue series, and we're only up to issue seven. I'm starting to think that the only way I'll get to the end without having DC spoil it early is to bury my head in some sand.

The solicitations also include two Injustice 2 collections, Volume 4 and 5, both of which reprint issues featuring appearances by Booster Gold, plus a new reprint of the Zero Hour miniseries.

You can read the solicitations for all DC books shipping in March — if you dare! — at Newsarama.com.