Issue Notes: This book was first released online at Comixology.com in two installments (#61-62) for 99¢ each. This print edition has a cover price of $2.99.

Page 3, panel 1
As the Green Lanterns are being decimated by Starro and the Red Lanterns over the planet Oa, the cavalry arrives in the form of Booster Gold, the Titans (Superboy, Wonder Girl, Starfire, Blue Beetle) and Lobo. Booster is wearing an oxygen mask, but his scalp is exposed. It is not clear why prolonged exposure to the freezing temperature of space does not harm him. (Perhaps he is using his force field, but it is not seen.)

Page 8, panel 3
Booster Gold requests from a Guardian a pair of pants for Lobo, who lost his in space. Normally, this isn't the sort of thing I'd write an annotation about, but I had to reread this page five times before I realized that Booster wasn't simply teasing the Guardian about the Guardian's own apparent lack of pants. Booster's right: Oa has a real pants problem.

Page 16, panel 1
When the Green Lanterns mount their Hal Jordan-led counter-offensive against Starro, Booster Gold flies into battle beside Sinestro. Injustice continuity deviates from post-Crisis on Infinite Earths continuity sometime before the events of Infinite Crisis, so it is unlikely that Booster Gold's meeting with Sinestro as seen in the pages of Booster Gold Volume 2 #2 ever happened. This is probably the first meeting between the pair in Injustice continuity.

Page 18, panel 5
Blue Beetle, figuring that Starro is headed back to Earth, tries to sneak away from the fight to head off Starro. Like a good mentor, Booster refuses to let him go alone. 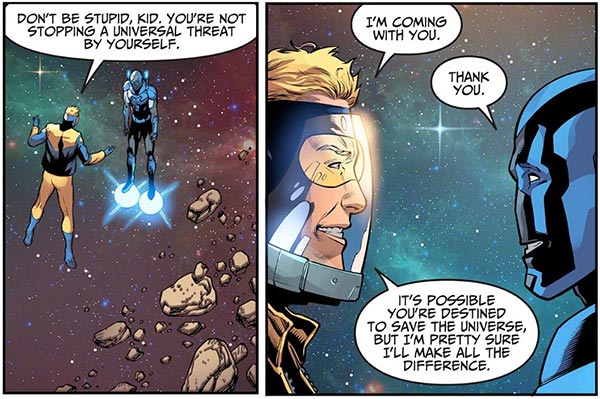