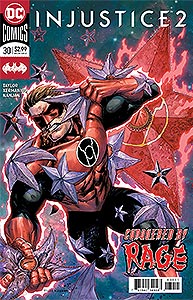 Issue Notes: This book was first released online at Comixology.com in two installments (#59-60) for 99¢ each. This print edition has a cover price of $2.99.

Page 11, panel 2
Booster Gold pilots the stolen Justice League Javelin into space in pursuit of Blue Beetle, who has been kidnapped by Lobo. Accompanying Booster are Skeets, Superboy, Wonder Girl, and Starfire.

Page 12, panel 2
Booster calls Lobo the "testosterone-fueled personification of the 1980s," which is pretty on-the-nose. Keith Giffen created Lobo in 1983, and the character soon became a meta-commentary on the violent, "grimdark" anti-hero character that became so dominant in the comics of the late 80s and early 90s.

Page 14, panel 2
Booster Gold recognizes Lobo but not Metron. This is an example of how Injustice continuity differs from the post-Crisis on Infinite Earths continuity on which it is based. For the record, Booster first encountered Metron in Justice League International #12 (1987) and Lobo a mere six months later in Justice League International #18 (1988).

Page 14, panel 3
Skeets explains that Metron can have a conversation in the vacuum of space because "Reason has a habit of bending around gods." This is a convenient (and clever) excuse for any scientific impossibilities that the current situation presents, such as the "bang" sound effect accompanying the firing of Lobo's Kryptonite gun on the previous page.

Page 19, panel 1
Booster says "they" wouldn't let him save Ted Kord, but does not say who "they" are. Are "they" Rip Hunter of other the Time Masters? Or are "they" someone else. (Answers to this question will come in future issues.) 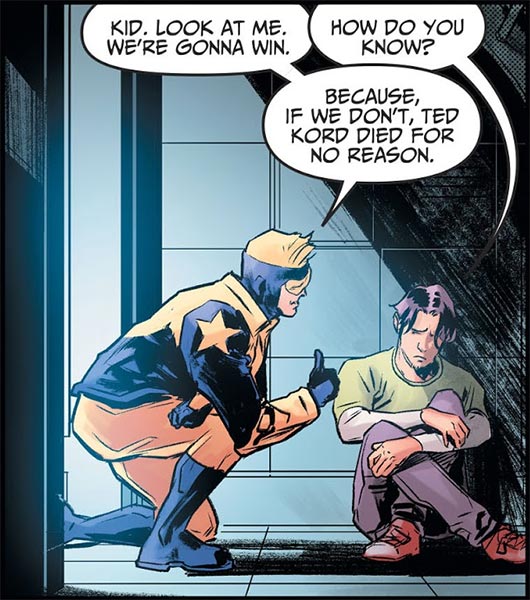 Page 20, panel 5
Flying out of the Javelin into interstellar space, Booster wears an oxygen mask over his face but does nothing to protect his exposed scalp from the extreme cold. Presumably, he is using his force field to keep his heat, though neither it nor his flight ring are shown. (Or is this attributable to more of Metron's reality-bending effect?)