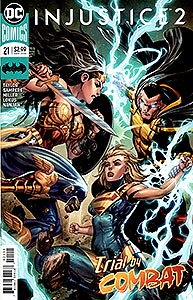 Issue Notes: This book was first released online at Comixology.com in two installments (#41-42) for 99¢ each. This print edition has a cover price of $2.99.

Story Notes: Booster Gold appears only in the first half of this issue, digital chapter #41. 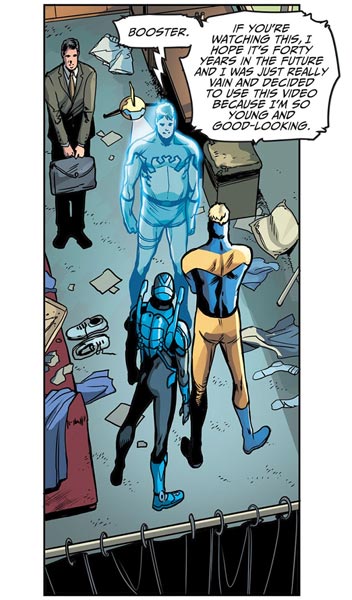 Page 5, panel 1
Skeets arrives! It's worth noting that in the Injustice continuity, Skeets' retains its original football shape.

Page 5, panel 3
Although Booster Gold's real name (Michael Jon Carter) was public knowledge in the "New 52" DCnU, it was a secret from the general public in the post-Crisis continuity that Injustice is based on. In fact, "Booster Gold" was his legally recognized name so far as the American government was concerned.

Page 6, panel 1
Ted Kord's lawyer, Justin Baines, arrives with a hologram recording of his late client. To Booster's disbelief, Kord has left him ownership of Kord Industries. In addition . . .

Page 7, panel 3
. . . Ted has made arrangements to purchase the equipment that Booster stole in the 25th century, thus ensuring that Booster is their rightful possessor. That's a real friend.