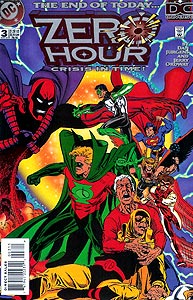 Brief Synopsis: Metron and Superman gather heroes from across the DC universe to battle a danger that is eradicating history.

Issue Notes: "Zero Hour: Crisis in Time!" issue 2. The issues of Zero Hour are numbered backwards from 4 to 0. All Zero Hour issues are cover dated September 1994.

This story has been reprinted in:
Zero Hour: Crisis in Time (1994) 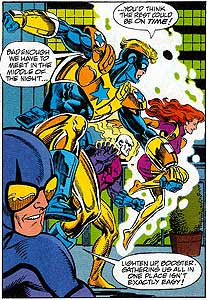 Page 7, panel 3
Answering Superman's call for heroes, Booster Gold arrives in New York City with fellow Justice Leaguers Blue Beetle II, Maxima, and Metamorpho. Booster is irritated that the other heroes are slow to arrive. Whether his irritation stems from eagerness to please Superman, frustration with being made to wait for others, or simply a comment on Booster's time-traveling origins is unclear.

Page 21, panel 2
Booster recognizes the city materializing in the sky as a city from the 25th century. Booster doesn't mention what city it is, but since it appears that timelines are merging, it is probably New York City from the 25th century. Despite the fact that Booster could probably receive medical treatment to remove him from his armored life-support system inside the advanced city, he doesn't hesitate to join the heroes acting to save the present-day New York City. (Booster has lived each day trapped inside what is essentially a glorified pacemaker since Justice League America #90.)

Boosterrific Review: Touted as an opportunity to repair continuity damage lingering from the Crisis on Infinite Earths' re-definition of the DC universe, this series is shaping up to be little more than an excuse to have every character in the DC Universe get at least a line of dialogue in each issue. This issue features a lot of discussion and a limited battle against a seemingly invincible enemy. While the art of Dan Jurgens and Jerry Ordway is better than should be expected considering the high character count, some of the effect is lost to the garish colors of Gregory Wright. Apparently in the DC Universe, time is a rainbow. Following the surprise revelations of secret identities in this issue, it's hard to imagine that this series is going to become less confusing as it moves forward.