The best thing about delaying news of DC's new releases until a day after they are released is that it gives me time to see the books before I tell you about them. Or it would, if my Local Comic Ship had received their DC shipment before they closed for the day on Tuesday.

Anyway, as you may have heard (*couch, cough*), yesterday saw the release of Harley Quinn #74, the final chapter in the "California or Death" story (and the next-to-last issue in the current series). There's a preview available on comic-watch.com which was released on Monday (which makes a good case for my not running "New Releases" posts on Mondays).

Booster Gold isn't in the preview, but I promise you he's in there, as this page proves. 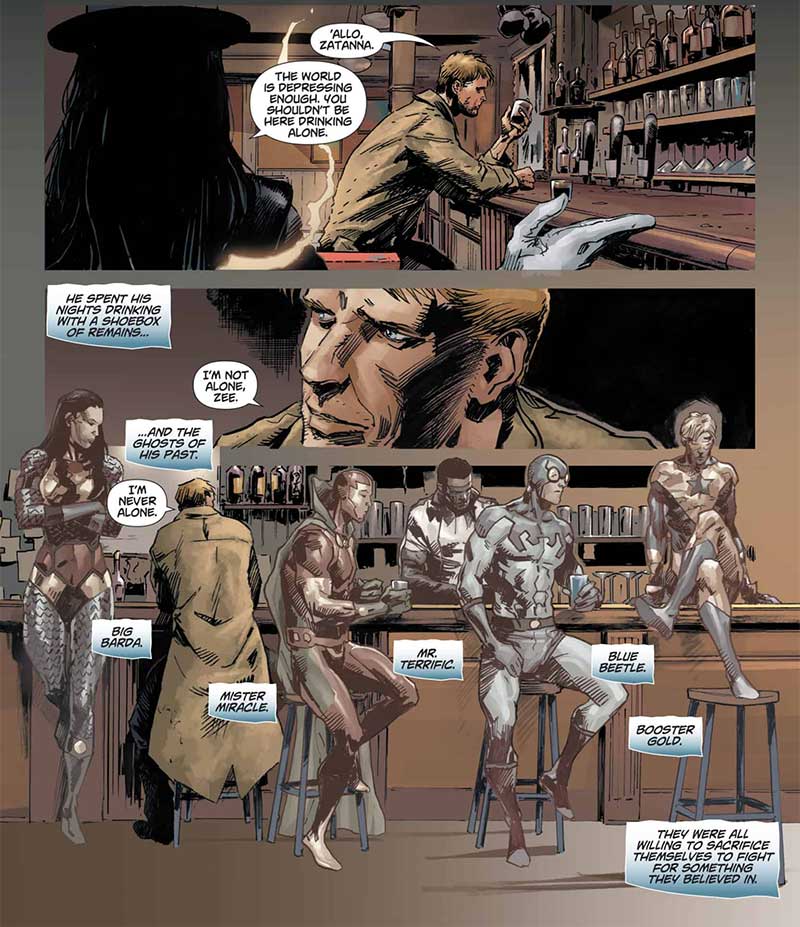 But wait, there's more! Booster booster Modinda reminds that the collected edition of the Flash Forward mini-series is now in stores. Booster made a cameo appearance in both issue #1 and the epilogue originally published in Flash #750, but those aren't Booster's only panels in the book.

BleedingCool.com reports that the expanded "Flash Forward: Epilogue" story that had been planned for the never-released Free Comic Book Day 2020 Generation Zero Gods Among Us has been included in the trade. So if you buy it, you'll also get this: 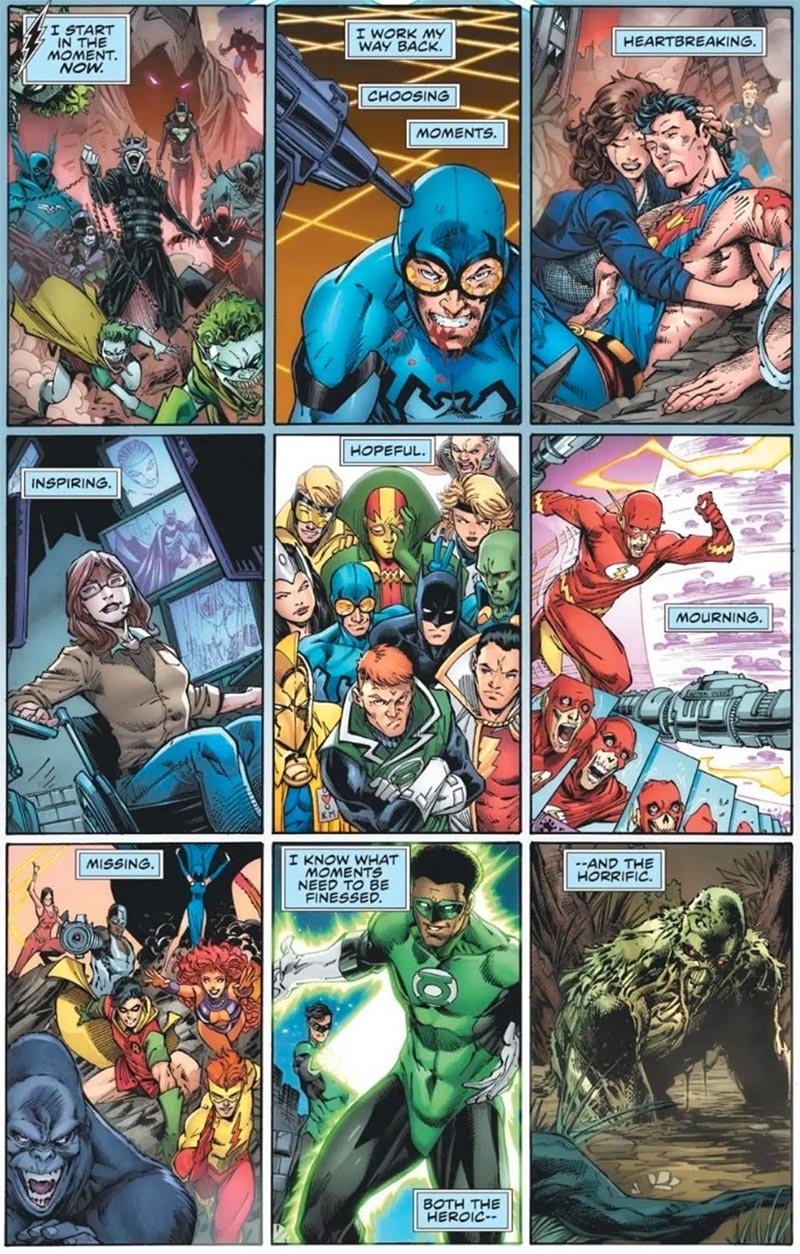 Three Booster Gold comics in one day? 2020 is looking up!

UPDATE 2020-07-08: My Local Comic Shop didn't get their shipment of DC Comics on Wednesday, either. Maybe Friday, they now say, which is not encouraging. DC, if you wanted to cut your own throat after leaving Diamond, this is how.

Take, for example, today's DCeased hardcover. It reprints all six issues of the mini-series plus — and this is the relevant part for Booster Gold fans — the DCeased: A Good Day to Die one-shot. The final issue of that series was released to comic shops only three weeks ago.

And considering that those 7 issues cost $4.99 apiece, it is actually less expensive to buy the $30 hardcover collection than the individual floppies. Trade-waiting has never been so easy.

Considering that this series is about the end of the DC Universe as we know it, Skeets isn't going to be happy whether you buy it or not.

Taquelli posted on Nov. 21, 2019 at 4:32 PM
Why does Booster's costume change completely in-between the two panels? Does he have a weird time disease in this book?

Today's DCeased: A Good Day to Die #1 is a one-shot spin-off of Tom Taylor's DCeased mini-series. DCeased is a zombie story set in an alternate DC Universe. Don't expect anyone to make it out alive. 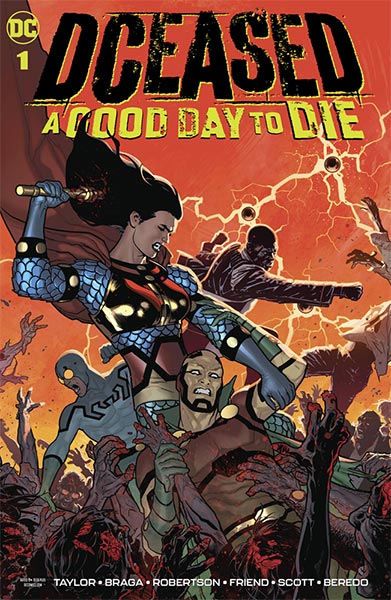 The book has four solicited covers, none of which includes Booster Gold. I'd consider that an especially bad sign for our hero.

Speaking of covers, also released today is Legion of Super Heroes Millennium #1. It, too, has multiple covers, one of which is half of the double-cover that will pair with the cover to October's issue #2 that has Booster Gold front and center. If you plan on completing the set (drawn by artist Bryan Hitch and previewed here), you might want to go ahead and pick that up.

Buy any one or more of those covers and make Skeets happy, at least so long as Skeets is capable of happiness. The vector for the DCeased zombie outbreak is digital technology, so not even Skeets is safe. (Gulp!)

When Being a Completionist Sucks

It's a little early for DC comics September solicitations, but IGN is already reporting that we should expect to see Booster Gold in at least one comic this fall. Too bad he probably won't survive it.

DCEASED: A GOOD DAY TO DIE #1 (One-Shot)
Written by Tom Taylor
Art by Laura Braga, Darick Robertson and others
While the mainstays of the Justice League—Superman, Green Lantern and Wonder Woman—battle the worldwide infection in the pages of DCEASED, a group of other heroes work to stop the impending apocalypse—no matter who they have to kill! Mr. Terrific assembles a motley group of surviving heroes including Mister Miracle, Big Barda, John Constantine, Blue Beetle and Booster Gold as they attempt to fight back against the tide of death. Can this ragtag group save the world where the Justice League has thus far failed?
On sale 9/4/19; 48 pages; $4.99

While I'm no fan of DC's super-bleak alternate universes — there has to be an endpoint to how grim 'n' gritty a comic universe can get, right? — I do have a great deal of respect for writer Tom Taylor's characterization. As a spin off of a video game, Injustice doesn't feel much like a DC story, but Taylor's characters are easily recognizable as the heroes who survived dozens of other Crises. That's considerably more than we got out of the last nine months of Heroes in Crisis.

So although I'm not eager for another zombie invasion, there's always room in my collection for more Elseworlds comics with the "real" Blue and Gold. Even if they will inevitably get their brains eaten.

And hey, at least it's only a one-shot.

Cort posted on Jun. 14, 2019 at 3:49 AM
Well, there's also Legion of Superheroes: Millennium #2 which features Booster Gold on the trip through DC's various futures. Seems to be a re-framing of his origin of sorts, drawn by Nicola Scott and scripted by Brain Bendis. Atleast there's been more coverage of Booster in the last year and a bit here than in the last five. Hahaha.

Plus even with the doom and gloom of DCeased, maybe Taylor can show some 'spots of light' like he did often in Injustice 2 and very much in using Ted and Michael, even if a tad grim.

Ithildyn posted on Jun. 14, 2019 at 5:59 PM
@rob Hear hear. At this point I guess Boost dying and Ted surviving would put a fresh spin on the inevitable doom of their duo.