Booster Gold isn't in the solicitation text for today's Harley Quinn #73, nor is he in the previews (which you can see at comic-watch.com). But Booster booster Rob Snow reports that our hero is definitely in there, and I have proof: 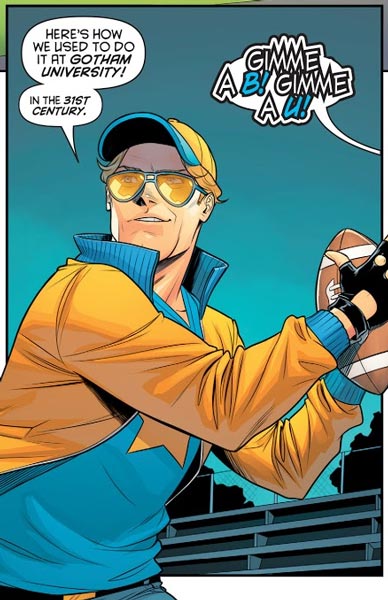 Booster has appeared in each of the previous three issues, developing something of a romantic relationship with the title character before walking out at the end of the last issue. Today's issue #73 is only the fourth chapter of a five chapter story. The solicitation for next month's Harley Quinn #74 promises that "Harley will come face to face with the person pulling the strings" in the "epic" finale. After playing such a big part in the story so far, it's hard to believe that Booster won't be there to lend a hand. (Or be revealed as the puppeteer! Bwah-ha-ha!)

And while we're on the subject, I should mention that Issue #75 will be the last in the series. (Don't tear up. I'm sure it's just going to reboot. Again.) Writer Sam Humprhies has promised "a happy ending for all." Could that mean Booster Gold, too? I guess we'll find out in August.

Also, 31st century? Did Booster forget when he came from?

Michael Stalans posted on Jun. 10, 2020 at 4:18 PM
I'm kind of getting a Kim PossiblexRonStoppable vibe off of Booster and Harley. I don't care what people would say about it, but I'm big time shipping those two.

Boosterrific [Official Comment] posted on Jun. 10, 2020 at 5:43 PM
I've never seen an episode of that cartoon. Which of those two would be Booster in that analogy? Was the other a psychopathic mass murderer?

Obviously, I'm strongly biased against Harley Quinn, period. And because I don't like her, I'd rather not read comics with her in them, no matter who she's in a relationship with.

Modinda posted on Jun. 11, 2020 at 12:38 AM
Booster Gold, Blue Beetle, and Skeets are going to have a story in the DC Cybernetic Summer anthology comic that's coming out on July 28.
https://www.gamesradar.com/cyborgs-and-robots-gone-wild-in-new-dc-summer-special/

Erin posted on Jun. 11, 2020 at 7:40 PM
31st Century? Did Bendis retcon that? He was also a football player not a baseball player but I'm willing to let that one go because I'm going to write an essay about it otherwise.

I don't care for Harley in general and the idea of her with Booster is really disastrous even if you ignore HIC. With HIC intact I can not fathom why Booster would even want to be in the same room as her. If he was written in character I don't think he'd ever consider her in a romantic fashion.

Boosterrific [Official Comment] posted on Jun. 11, 2020 at 8:41 PM
Erin, what's this about baseball? Booster has his dates wrong, yes, but he's holding a football (in preparation of a pass) and clearly coaching a football team in the issue. Is there some other reference to baseball I'm missing?

On Monday, I mentioned that Booster Gold: The Big Fall is released today. But that's not the only place you'll spot Booster Gold in your Local Comic Shop this week. Take along an extra $6 for the Tales from the Dark Multiverse: Infinite Crisis #1

This one-shot issue is essentially an Elseworlds tale, re-imagining the unfortunate events of Countdown to Infinite Crisis (2005) and its aftermath which took place in Scott Snyder's Dark Multiverse. The advance solicitation text (available at CBR.com) promises a prominent role for Booster Gold:

DC's mega-event "Infinite Crisis" saw the destruction of the Trinity, the rise of Alexander Luthor and Superboy-Prime, and the rebirth of the Multiverse...but it all started with Ted Kord, the Blue Beetle, who saw it all coming and died with secrets that could've saved the world. But...things happened differently in the Dark Multiverse! Not only does Blue Beetle survive- he thrives! And after killing Maxwell Lord himself, Ted sets off a chain of events that irreversibly alters the lives of the Justice League and his best friend, Booster Gold. In trying to prevent a crisis, Blue Beetle becomes the Crisis...and the Dark Multiverse will never be the same.

There are no happy endings in the aptly named "dark" universe, so don't expect this What If...?-style story to be a positive for Booster or his buddy. (Think "Blue & Gold" from Booster Gold #0 to #1 Million but grimmer and grittier.)

If you have the stomach for it, buy this issue and make Dark Skeets happy. 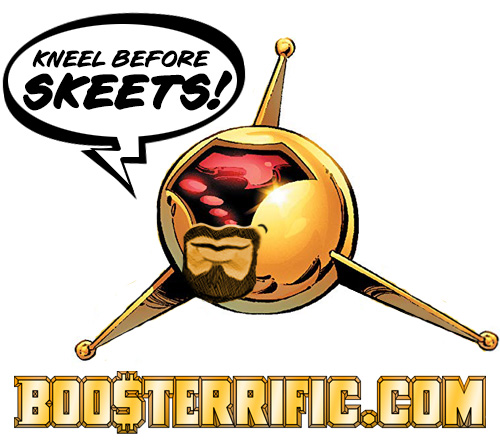 rob snow posted on Nov. 27, 2019 at 10:17 AM
Yeah, it's a well done story, but in the words of Tamsey Bolton"If you were expecting a happy ending, you weren't paying attention "

Other than a one panel flashback, it's been 492 days since we last saw Booster Gold in action. The last time we encountered such a drought, it was broken by the arrival of Infinite Crisis. If you miss those days, DC has something for you.

Today, DC releases Absolute Infinite Crisis, a $99.99 hardcover edition collecting the entire 2006 mini-series (though not the tie-in series like the Booster-centric The OMAC Project). Booster plays a smallish role in the story, but it does set the stage for his star turn in 52 and his second series.

If you've got $100 burning a hole in your pocket, you could spend it on worse this holiday season.

Booster All Day Every Day

Mogo is a living planet that first appeared in the Alan Moore story "Mogo Doesn't Socialize" in 1985, and in the years since has gone on to become one of the most powerful members of the Green Lantern Corps. That makes it all the more impressive to discover that Mogo is less powerful than Booster Gold.

At least in the video game Infinite Crisis.

Fragment of Mogo vs Booster Gold
These 2 items have become virtually the same item.
...
I have the impression that at this point Booster Gold is clearly a better pick.

That observation comes from poster Rikishin at the Infinite Crisis Forum, where it was generally agreed that Booster is better than Mogo. (You can find out yourself: Infinite Crisis is in open beta development at InfiniteCrisis.com.)

Both Booster and Mogo debuted in 1985, and both are virtually unknown among people who don't read DC Comics publications. As great as it is that Booster Gold comes out on top, it's just nice to see that someone is still talking about them all these years later in the Internet age.