Cover Description: Harley Quinn, surrounded by several Booster Golds, rues that he is her guest star in this issue.

Brief Synopsis: Booster Gold aids Harley Quinn in her ongoing investigation into the death of her friend in Los Angeles, CA.

Issue Summary: Booster Gold and Harley Quinn make plans for a heist (and hold hands) on a rooftop above Lost Angeles, California.

Later, the pair execute their plan, with Harley engaging in a public wrestling match while Booster raids the contents of wrestling organizer Baby Face's office for evidence linking him with the murder of Harley's friend, Jade Feather. Though successful, the raid results in Baby Face withdrawing support from Jade Feather's orphaned daughter.

The raid produces no leads, so Harley and Booster crash a cult gathering in a mansion that was linked to an earlier clue. Posing as a rich couple with unusual sexual preferences, the pair sneak into the basement where they find alien Fourth World technology and a disillusioned cultist who points them to a North Hollywood construction site.

The development under construction turns out to be run by the same person tangentially linked to several other clues, and Harley decides he must be behind everything. She vows to kill him, but Booster refuses to help. The couple goes their separate ways, causing Harley to belatedly realize she has romantic feelings for Booster.

Harley attempts her assassination mission alone only to discover that her target was expecting her.

Issue Notes: This issue was originally solicited for release on April 1, 2020. However, the exclusive distributor of DC Comics, Diamond Comics Distributors, closed its doors on that day in response to the COVID-19 pandemic response measures. As a result, the book was actually first released to comic book stores on May 12, 2020, through DC's new direct distribution partners, Lunar and UCS. Diamond released the book to comic book stores when it re-opened for business on May 20, 2020.

Page 1, panel 1
Booster and Harley sittin' in a tree.... Actually, the pair are on a rooftop in downtown Los Angeles discussing plans for her investigation into the murder of her professional wrestling friend.

Page 1, panel 4
And now they're holding hands? You're a quick mover, Booster Gold. This is only your third issue as a guest star.

Page 2, panel 1
Aaand now Harley Quinn has thrown Booster off the roof. Yeah, okay, that tracks. She did promise to kill him in Heroes in Crisis.

Page 3, panel 1
Aaaaaand now Booster flies to Harley's defense in a wrestling ring. I'm getting some real whiplash here. (The events on this page pick up immediately where the previous issue ended, meaning that the rooftop vignette must have occurred prior to the end of that issue.)

Page 7, panel 5
After drinking directly from a whiskey bottle to impress Harley, Booster gives them the couples portmanteau "Goldie Quinn." I think I need to sit down.

Page 8, panel 1
"Gordita Beach" is a fictional southern California beach town created by writer Thomas Pynchon. It was used as the setting of the noir detective novel Inherent Vice, later turned into a movie of the same name.

Page 10, panel 4
POWER UP: Encountering a door made from alien Fourth World technology in the basement of a mansion, Booster uses a laser in his watch to break through. He credits Mister Miracle for teaching him how to do it. Is this an overt confirmation that the Justice League International is back in continuity? (Or that this story takes place in pre-Flashpoint continuity?)

Page 14, panel 1
Following a lead given to them by a member of the Orange Crush Cult (that obviously has nothing to do with the soda of the same name), Booster and Harley relocate to a commercial development in North Hollywood, California. (The empty landscape doesn't look much like North Hollywood, but Harley Quinn is telling this story. We should expect she'd take some liberties with reality.)

Page 17, panel 3
After Harley admits that she plans to kill the person who killed her friend, Booster finally draws a line and says he cannot help her do that. Somebody's playing hard to get. 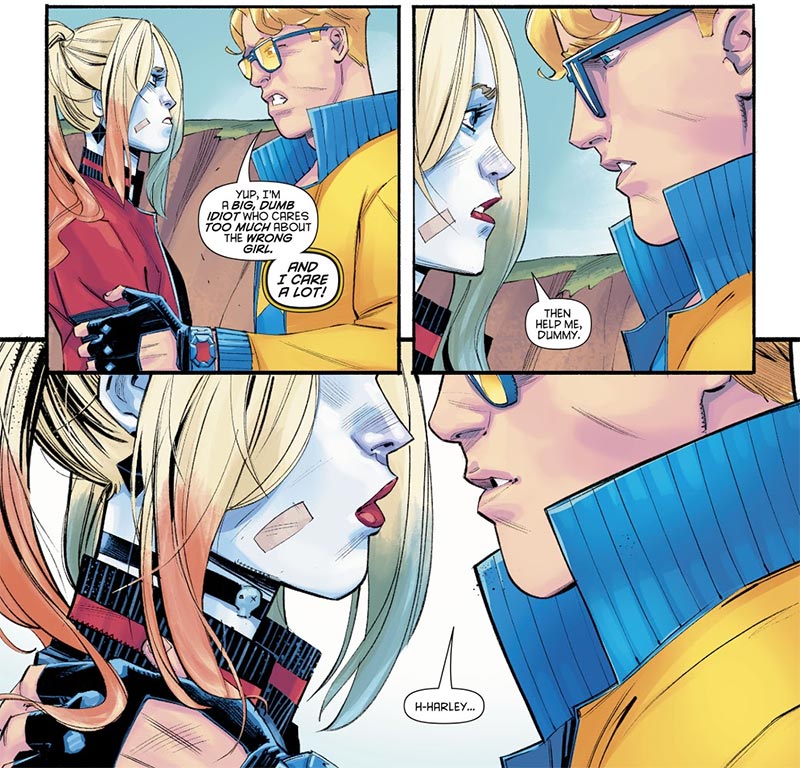 Page 20, panel 5
When Booster follows through on his ultimatum and leaves, Harley realizes what has been clear to the reader since page one: she has a crush on Booster Gold. (Don't sweat it, girl. We all do.)

Boosterrific Review: I really don't know what to make of this issue. I enjoy Abel's art, and Sam Humprhies' story is not without humor and heart.... It just doesn't feel like it takes place in any continuity I've ever read before, and I'm not sure I care about any of these characters, whoever they are.