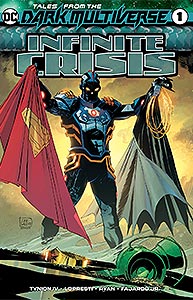 Cover Description: Dark Blue Beetle holds the cape of Superman, the cowl of Batman, and Wonder Woman's Golden Lasso. The cover is intentionally reminiscent of the Superboy cover of Infinite Crisis #6. (No Booster Gold.)

Brief Synopsis: In the Dark Multiverse, the events of Infinite Crisis took a distinctly darker turn.

Issue Summary: Maxwell Lord tries to convince Blue Beetle to join his scheme at world domination. Instead, Beetle kills Lord and assumes control of Checkmate, thwarting the pending Crisis and, unintentionally, Alexander Luthor's plans at restoring the multiverse. Luthor strikes back with Superboy-Prime, convincing Beetle that he has to take even more drastic measures to maintain control. Beetle falls under the influence of Brother Eye, and things soon go south for Earth's heroes. Booster Gold tries to talk sense into his friend but fails (fatally). In the aftermath of the fight, Beetle assumes the mantle of the World's Greatest Villain. Reveal Potential Spoilers

Page 4, panel 2
ALTERNATE REALITY: After a brief introduction from the Tempus Fuginaut recapping the aftermath of Crisis on Infinite Earths, the story leads into events exactly as they appeared in Countdown to Infinite Crisis. Despite the reuse of dialog and panel layout (and ignoring the fact that this entire issue is built on re-interpreting their original story), the original writers and artists of Countdown to Infinite Crisis receive no credit in this issue.

Page 10, panel 2
Booster Gold, assuming his pal Beetle is dead, charges into a Justice League meeting in their Watchtower headquarters on the moon. This encounter is based on events originally published in The OMAC Project #2.

Page 12, panel 3
Beetle's assumption of control of Checkmate and alliance with Brother Eye result in the prevention of events in the Infinite Crisis tie-in mini series The OMAC Project,...

Page 19, panel 1
Booster visits Beetle in his new offices in the Checkmate castle in the Swiss Alps. Booster's goal is to try and talk Beetle out of his new plans at influencing world affairs. Beetle doesn't listen.

Page 43, panel 1
After Beetle's best laid plans have resulted in the deaths of many of Earth's greatest heroes, Booster tries again to talk some sense into his old friend.

Page 44, panel 3
SPOILER WARNING!: Deciding that there is no other way to stop the mass slaughter already in progress, Booster pulls a gun on Beetle, just as Maxwell Lord did at the beginning of the story. Before Booster can pull the trigger, Brother Eye kills him. This tragic chain of events will result in Blue Beetle's total world domination and assumption of the title of World's Greatest Villain. Reveal

Boosterrific Review: I've never been a big fan of these types of stories based on reinventing the details of an earlier, significant work. They usually seem to be built on the premise that we got the best possible story the first time. So why did we need to do it again? That said, the issue does have good art and is competently told. But it's really only for fans (or obsessive haters) of the original, superior Infinite Crisis.