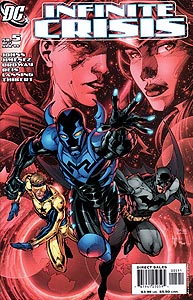 Issue Notes: This mini-series is essentially a direct sequel to the Crisis on Infinite Earths miniseries published 21 years earlier in 1985. This issue includes Booster Gold's introduction of the new Blue Beetle III to Batman.

Page 5, panel 2
Booster Gold, Skeets II, and Jaime Reyes travel to Batman's Batcave. This is Booster's first visit to the Batcave. Reyes comments that he thought that Booster Gold was a fictional character used to sell cereal, like Kellogg's Froot Loops' Toucan Sam mascot and Quaker Oats Company's titular Cap'n Crunch. (In Booster's second appearance in Booster Gold, Vol. 1, #2, he filmed a commercial for the fictional Flakies cereal.) Rather than be annoyed by the slight, Booster looks forward to the glory that his actions during Infinite Crisis will bring him. Presumably, Booster references some future knowledge about Booster Gold's heroic actions in the 21st century.

Page 6, panel 1
FIRST APPEARANCE: First appearance of Blue Beetle III in costume. The mystic scarab found by Jaime Reyes has transformed him into the latest incarnation of the Blue Beetle. Booster was apparently aware that this would happen to the possessor of the scarab following the death of the second Blue Beetle.

Page 6, panel 5
HIS STORY: Booster tells Batman that he knows which heroes Batman is planning to assault the Brother Eye satellite with, and he knows that Batman will be unable to locate the cloaked Brother Eye. As usual, Booster is being coy about his exact knowledge of future events. If Batman never finds Brother Eye, the heroes are doomed to lose. But if the heroes lose, how will Booster rise to glory?

Page 21, panel 4
Batman's chosen team of heroes for the assault on Brother Eye gather before the second Blue Beetle's trademark Bug airship in the Batcave. The heroes pictured are Black Canary II, Black Lightning, Green Arrow, Hal Jordan (as Green Lantern II), John Stewart (as a Green Lantern), Metamorpho, Mr. Terrific II, and Sasha Bordeaux. Booster has worked with all of these heroes in the past except for Sasha Bordeaux. Bordeaux was once the bodyguard and lover of Bruce Wayne before joining Checkmate and rising to the position of Black King's Knight, loyal servant of the Black King, Maxwell Lord. It is Bordeaux who provided Batman with the integral clue that Blue Beetle II had been in The OMAC Project #1.

Boosterrific Review: This issue, perhaps more than any before it, owes a great debt to the Crisis on Infinite Earths, which has to varying extent dominated the storytelling in the DC Universe for two decades. Writer Geoff Johns is aware of this, and is using it to great advantage in a yet another installment of a fantastic story.