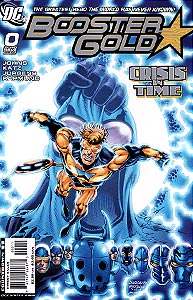 Cover Description: Booster Gold and Skeets II fly over a field of variations of Blue Beetles. In the background, a gloved hand holds the torn cowl of Blue Beetle II. The cover of this issue is intentionally evocative of the covers of the Zero Hour mini-series. The motif of a hand holding a torn mask and the heads along the bottom of the cover is similar to the arrangement of the cover of Zero Hour #4. The background is filled by a white void as appeared on the covers of all Zero Hour issues, and based on the size of the void on this cover, the events in this issue would appear to take place between Zero Hour #3 and Zero Hour #2. (The issues of Zero Hour counted backwards from 4 to 0.)

Brief Synopsis: After Booster Gold and the Blue Beetles cross paths with the foes of the Zero Hour event, Booster has the opportunity to re-evaluate his past.

Story Notes: Like all issues taking place within the DC Universe immediately following the events of the "Zero Hour: Crisis in Time" storyline, this issue is numbered 0 and contains the origin story of its title character, especially the relevant details of that character's history that were modified by the change to the timeline resulting from the events of Zero Hour.

Page 3, panel 2
Kord doesn't understand what Booster has against the tiny alien Mister Mind. To fully understand Booster's animosity, Ted needs to check out issues of 52, all of which occurred after his death.

Page 4, panel 4
Booster and the time-traveling Beetles encounter Hal Jordan (as Parallax) and Hank Hall (as Extant) in the time stream. Based on the conversation between the two villains, they are here encountered during the events of Zero Hour #2. This is actually Booster's first meeting with Extant, having never directly confronted the villain during the events of Zero Hour. Booster has already met Hall on several occasions. The two have never been on friendly terms.

Page 6, panel 1
HIS STORY: Booster confirms that he is over 30 years of age. Though this has been noted in the past, it is the first time that Booster has admitted it. (Booster has long suffered from a bit of Peter Pan Syndrome, refusing to "grow-up" mentally.) When Booster first arrived in the 20th century, he was approximately 20-years old (noted by Skeets I in Booster Gold, Vol. 1, #5). It would seem that Booster Gold ages 1 year for every 2 years that pass.

Page 9, panel 3
This is actually the second time that Booster Gold has crash-landed a Rip Hunter designed Time Sphere in the 25th century. It last happened in Booster Gold, Vol. 1, #13. Although, from the 25th century's point-of-view, this is the first time such a thing has happened, as Booster has arrived...

Page 10, panel 1
HIS STORY: ...on the day that he is caught cheating in a football game, thereby ending his very promising football career. Michael Jon "Booster" Carter was the star quarterback for Gotham University, and his downfall came following a game against Ohio State University. In the 21st century, the Ohio State University "Buckeyes" football program is a significant athletic tradition, strength, and national support. Since it has been previously made clear that football has only recently been reintroduced as a sport in the 25th century, it is unlikely that the proud football program of the 21st-century Buckeyes is related to the 25th-century team in any way other than name.

Page 13, panel 7
Booster vows to save his sister Michelle from the moments before her death, just as he has saved Ted Kord. For a man who has recently dedicated himself to saving history, he sure is determined to change it.

Page 14, panel 2
Booster and the Beetles have broken into the Space Museum where he once did/will soon steal the equipment that allows him to be Booster Gold. Pictured in the foreground of the room is Booster's Legion Flight Ring. Interestingly enough, Booster is currently wearing the same ring on his finger.

Page 15, panel 1
Among the identifiable exhibits in the Space Museum are Batman's Batarang and Utility Belt and Adam Strange's helmet.

Page 15, panel 5
Booster is attacked by the Space Museum's robotic security team, including the original Skeets. Technically, this would be the first chronological meeting between Booster and Skeets from Skeets' point of view. Since Skeets had knowledge of Booster Gold's 20th-century activities when Micheal Carter abducted him (as noted in Booster Gold Vol. 1, #15, is it possible that Skeets remembered this event and would later recognize Carter?

Page 16, panel 3
BORROWING THE CAR: Skeets and the other robots appear to transform into OMAC units just as Booster and company escape in the same Time Sphere that Michael Carter will later use to travel to the 20th century to begin his career as Booster Gold. Of course, for that to happen, Booster will first have to replace the Time Sphere that he's borrowing so that it will be available for him to borrow in the future.

Page 19, panel 4
ALTERNATE REALITY: After the Blue Beetle of the 27th century erases the memories of Beetles I and III and returns them and himself to the proper points in the time stream, Booster and Kord return to Rip Hunter's lab, only to find it destroyed...

Boosterrific Review: Booster Gold's origin story is retold in an issue with direct links into a mini-series that took place nearly 15 years earlier. This combination of tying new readers into established DC continuity is what series writer Geoff John does best. And here he does it to perfection. Highly recommended. Having the artist of that original mini-series (Zero Hour) also working on this issue only makes the situation that much more enjoyable.