Brief Synopsis: The heroes of the DC universe continue to battle against time anomalies controlled by the time traveling villain Extant.

Issue Notes: "Zero Hour: Crisis in Time!" issue 3. The issues of Zero Hour are numbered backwards from 4 to 0. All Zero Hour issues are cover dated September 1994.

This story has been reprinted in:
Zero Hour: Crisis in Time (1994)

Page 4, panel 3
Booster Gold flies into action against the time-displaced city hanging over New York alongside Captain Atom, Emerald Dragon, Metron, Ray II, and Superman. When Booster speaks to Emerald Dragon, he reminds Booster that they have met before, back in Booster Gold, Vol. 1, #8, when Emerald Dragon went by the codename Ultra Boy. Booster Gold's fight with Ultra Boy was his first combat as a superhero. The meeting was not when Booster first acquired his Legion Flight Ring; it was when Brainiac 5 intentionally began the process that would result with Michael Jon Carter's theft of the Flight Ring in 500-years time. (Confused? Read Booster Gold, Vol. 1, #8 and #9.) 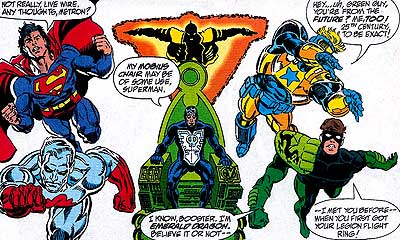 Boosterrific Review: Does anything that happens in this series make any sense? Between interminable periods of debate, heroes bounce from one near-catastrophe to another, managing to damage a handful of characters at each stop before realizing that nothing much has changed. After three issues, it seems that writer Dan Jurgens is marking time, checking off editorially mandated plot points until he springs his final surprise.